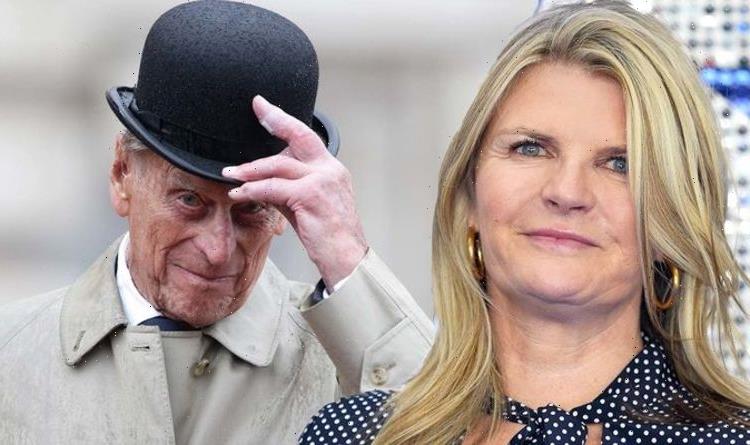 Susannah Constantine, 59, got caught up in an awkward mishap after suffering a wardrobe malfunction in front of none other than the Queen and Prince Philip. However, the Duke of Edinburgh came to the rescue as he gave her a “little nudge” after spotting that the straps of her dress had broken.

It happened after the What Not To Wear host was invited to a dinner party at Windsor Castle.

Speaking to Platinum magazine, Susannah explained how the story went on to inspire her podcast, My Wardrobe Malfunction.

She said: “I didn’t realise, and it was Prince Philip who was kind enough to give me a little nudge.

“A butler brought some safety pins and helped pin me back into it.”

“I was retelling this story at a dinner party last year and all my friends were laughing and saying, ‘Oh yes, I remember when…’ and it turned out that everyone had a story.

“So I decided to develop it into a podcast.”

During the candid conversation, Susannah also opened up about struggling with alcoholism and the additional woes that came with it.

The journalist confessed that the issue had controlled her “completely” despite her ability to carry out her usual activities.

The former Strictly Come Dancing star said: “It was waking up in the morning and feeling absolute shame and guilt and anxiety and fear.

“I was just tired of it, of not living my life properly, not living in the moment. It controlled me completely and I was always thinking about when I was going get the next drink.

“But on the outside, I managed to function, and I think that’s why it came as a shock to many people.”

“I’m the sort of person who will put myself down before anyone else has a chance to.

“That said, I have no desire to do anything about it. It’s a bit late for cosmetic surgery and it’s not something I’ve ever fancied anyway”

Susannah addressed the subject last year on the podcast My Mate Bought A Toaster.

She highlighted she had been in recovery for almost seven years.

“I’m an alcoholic and I’ve been in recovery for nearly seven years now.”

Read the full interview in the January issue of Platinum – out now.