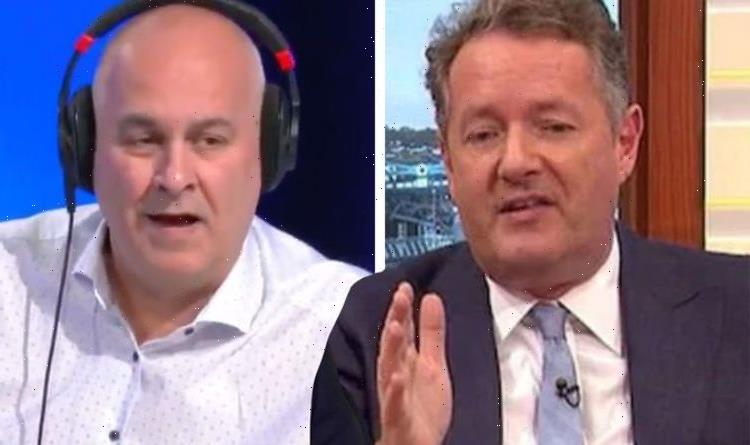 Piers Morgan, 56, often comes under fire from someone somewhere and has learnt to deal with the backlash admirably. So it was only natural that he offered some advice to his fellow broadcaster Iain Dale, who found himself in hot water over his comments he made during an interview with Tory MP Miriam Cates on Monday evening.

Never agree with Twitter – most people on here are complete idiots

While on the show, Miriam admitted she won’t be wearing a face mask on public transport after July 19 because “freedom is very important” and “showing our faces is part of being human”.

During the heated discussion, Iain blasted her as “irresponsible” and later took to Twitter to share his thoughts.

“I’m rarely surprised by the utter stupidity of some of our MPs, but this one really takes the biscuit,” he penned, as he shared a clip of the interview.

But the debate left viewers divided, with some condemning Iain for his treatment of his guest.

Having read some listeners’ furious messages, he tweeted yesterday: “I think today, I’ll just agree that everyone else is always right and I am always wrong.”

“It’s safer that way. Twitter will then be happy,” he penned sarcastically.

But his reaction sparked more outrage, with one fan suggesting: “Or just be respectful towards different opinions and not insult them.”

“Need to be more tolerant on the masks issue. The science is not conclusive, Iain,” a second agreed.

A third noted: “No. I’m happy with the polite but forceful debate and intelligent and challenging questions you put to guests which have long been your hallmark. But last night you behaved badly and crossed the line.”

But someone else had his back, praising: “No. You were right and thank heavens you stood up against ridiculous comments!”

Having seen the division his latest remarks stirred up, Piers waded in to side with Iain and provided some much-needed advice, knowing only too well how it feels to be in the firing line.

“Most people on here are complete idiots.”

It comes after people hit back at some of Iain’s comments, with one writing: “Miriam is super bright and a brilliant MP – she disagrees with you but that doesn’t make her ‘stupid.'”

But the presenter retorted: “Her views on this issue are not only stupid, but dangerous.”

Another added: “Appalling & irresponsible by ID [Iain Dale] we we trying to ‘move on’. By all means stay in and wear a mask but respect those who don’t want to.”

A third agreed, penning sarcastically: “Hi Ian, Just to remind you, there will be no legal requirement. If that bothers you, then that’s your issue and you’re entitled to your own opinion.

“If it makes you happier, safer and gives you a sense of duty wearing a face covering, then please carry on. I won’t be.”

“You’re out of touch with what the majority of the UK population want sorry… our lives back,” a fourth noted.

A fifth said: “I agree with her, not you mate.”