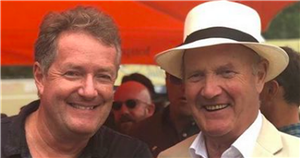 Piers Morgan's fans have been left amazed by his youthful father as the presenter shared a picture of the two to mark his dad's landmark eightieth birthday.

Captioning the post, he quipped: “Happy 80th Birthday to my Dad… a great man who taught me the two golden rules in life: 1) Always be polite to police officers and 2) Always drink the best French wine you can afford.

“Sadly, for him, he forgot the third one… Never let your son grow up to be an Arsenal fan if you support Spurs.”

In the celebratory post, the pair can be seen smiling together at an event, as Piers cheekily pours some champagne for his dad from an enormous bottle.

But the size of the bottle is not the only thing that has caught people’s eyes, with many remarking on the presenter’s dad, who has raised him since he was a toddler.

With Glynne Pughe-Morgan dressed to the nines in a beige coloured suit and matching hat, paired with a crisp white shirt, the pair look more like brothers than father and son.

One follower wrote: “Looks like your younger brother” to which Piers replied “I know” with some laughing face emojis.

Another person added: “Why do you look older than your dad?”

As well as sending across birthday wishes, many people couldn’t get their heads around how “young” Piers’ dad looked, gushing about “how incredible” the octogenarian looked.

Piers has been open about his rough childhood and the tragic death of his biological Irish father, Eamonn Vincent O’Meara, following an accident when he was just a toddler.

Eamonn was a dentist and was married to Piers’ English mum Gabrielle Georgina Sybille before he died.

Gabrielle later married Glynne who Piers is significantly close to, sometimes sharing pictures of his parents on his Instagram.

However, when Piers is not doting on his family online, he is lashing out at people online with his controversial opinions.

One of the latest receivers of his verbal rants was Prince Harry who he harshly branded as “pathetic” and “cowardly” following his latest revelations about the royal family.

The former Good Morning Britain presenter took to Twitter to voice his opinion following the latest claims Prince Harry made about the royal family.

Piers tweeted: “Oh FFS. Is there no end to Prince Privacy's victimhood tour?

“Constantly abusing his family, knowing they can't respond, is so pathetic & cowardly.