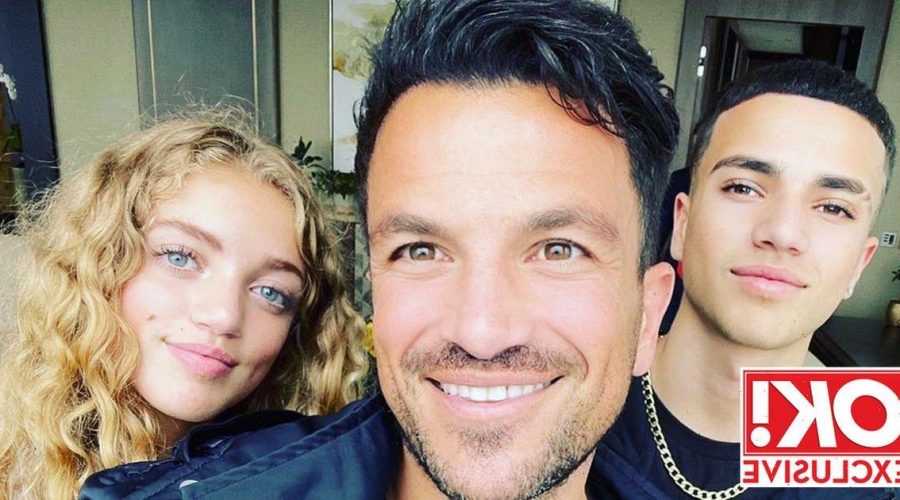 Peter Andre has opened up about his parenting skills, telling fans that he "works hard" to be a positive role model to his four children.

Writing in his latest new! column, the star also reveals how excited he is about upcoming family time – and shares his thoughts on another's famous family's latest drama: the Sussexes.

Are you an OK! VIP? If not, why not? It’s free and gives you backstage access to stories like this, exclusive home tours, special discounts and so much more! All you need to do is pop your email address below! P.s. if you’re already seeing this article in full, congrats – you’re already on our guest list! It will be my last show with Grease The Musical next week. It’s been a long run but it’s been really wonderful.

I can’t lie, I will absolutely miss the show and the cast and crew, but equally I’m looking forward to a bit of a break before Christmas and going back to being a hands-on dad again. I’ve really missed Emily and the kids. Theo has been asking for me constantly, which is wonderful and heartbreaking at the same time, but I know working is a means for me to be able to provide for my family.

I also think it’s setting a good example and showing that you have to work hard and things don’t come easy.

Talking of family, I recently posted a video of myself, Emily, Junior and Princess singing in the car and my Instagram followers were saying what a lovely relationship we all have.

We do have such a nice bond. It was fun to show the funny side of Emily, too, as people don’t often get to see that, but she’s such a cool person.

Junior really made me laugh in the video. He has such a cheeky side to him. All the kids really are sweethearts.

It tailors the user’s calories over a week, making dieting more manageable with weekly targets instead of the usual stressful calorie count per day.

I’ve been using this approach for years, but I just haven’t found anything to help me with it.

In searching for my own solution, I met my co-founder Ben Smith and joined the #itsfine business with the goal of rescuing
people from fad diets.

Meghan Markle has been criticised for doing another TV interview in America, this time with Ellen DeGeneres. It’s a tough one with Meghan and Prince Harry.

I’ve always stuck up for them, but I do think some of the choices that are being made are not great.

I want to support them but they’re making it quite difficult for people.

Many are saying it’s starting to wear thin, but on the other hand they have also done some great things for charity. Let’s see what happens.

What a hero Liverpool taxi driver David Perry is.

To risk his life to save other people from the bomb that had been planted in his taxi is a huge thing.

He undoubtedly saved lives when the device exploded and it’s unbelievable that he survived the blast himself.

I really think he should be nominated for a Pride Of Britain Award next year.

If trying to save other people’s lives is not enough of a heroic act to be worthy of an award, then I don’t know what is.

However, I think it’s so sad these terrorist acts are still happening. And for it to happen outside a women’s hospital makes you think, is nowhere safe?

For the latest on the Andre family sign up for OK!'s daily newsletter here.