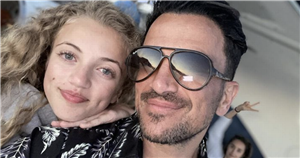 Peter Andre has confirmed Princess “won’t be going on Love Island”, after she told her fans she would “100%” go on the show.

Replying to the question, ‘If you was asked to go on Love Island when you were older, would you want to?’, Princess said: “100%.”

She continued: “I really want to go on it because when I watch it, I’m like ‘oh my gosh.’ I don’t know, it just looks fun.

But it was at that point, her protective dad Peter popped up in disguise wearing a red hood and cap to say: “Hi everyone, this is not her father speaking, she will not be going on Love Island.”

Fans could then see Peter take off his hood to reveal himself and confirm: “Yeah it is me, right.

“And no, she won’t be going on Love Island. Not tomorrow or next year or…ever. Um so yeah. Feel free to subscribe to her video and enjoy the rest of the video but come on, it’s not happening.”

This comes just a week after the Mysterious Girl singer admitted he would be open to the idea of his Princess going onLove Islandin the future.

Inhis new! column , Peter said: "I know I’ve said I don’t want them going on the show, but in reality, once they get to 18 they’ll be making their own decisions.

"I would actually love for the kids to do I’m A Celebrity one day as I think it would be a great experience – and if it wasn’t for the show Junior and Princess wouldn’t even be here!"

Posting to his Instagram, Peter shared a video full of happy photos of couple throughout the years to the music of Stevie Wonder.

Peter gushed in the caption: "Just like that, we’ve been married for 6 years. You’re not only the most amazing wife, you are an incredible mother to our children. You also are the kindest person I know. Happy Anniversary Emily."

However, the singer and former I'm A Celebrity contestant revealed that their anniversary had fallen on an awkward date as it clashed with the Euro final.