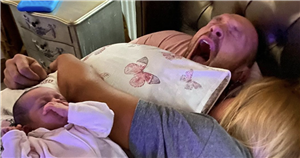 The mum-of-six, who is married to boxer Tyson Fury, revealed that the grief of losing two babies is something she will “never get over.”

Sharing a picture of her, Tyson and their latest addition, daughter Athena, Paris revealed her relief to be home with her family after Tyson’s successful Deontay Wilder fight at the weekend.

The soon-to-be author wrote: “The last week has been a whirlwind but I’m so happy to back home in Morecambe with the kids, yes all six of them!

“Even from a young age I always knew I wanted [a] big family – it’s in my bloodline after all as my Granny had eight – and with every baby my confidence as a mum has increased, I’ve got a routine and I know what works for us.

“I know from the outside people see our big family and assume we’ve never struggled to have children, but as it’s #BabyLossAwarenessWeek I wanted to share a little bit about our story as it hasn’t always been plain sailing.”

Paris, 31, then continued: “Very sadly we lost two babies which was just devastating to both of us and my heart goes out to anyone who has suffered the same.

“I write about this in Love & Fury and it’s something I’ll never really get over, but I was lucky I had Tyson and the rest of my family around to support me.

“It can be a very lonely experience for a lot of people. Thinking of everyone affected this week xx.”

They welcomed youngest daughter Athena in August, who spent several weeks in ICU following her birth, but is now home with her family.

It comes after Paris flew over to the US to support her husband in the lead-up to his boxing match, as well as from ring-side in a stunning blue sparkly dress.

Sharing a snapshot of the two of them enjoying a slap-up breakfast the morning after Tyson's well-deserved win, Paris gushed she was still "on cloud nine".

“It meant everything to be there with Tyson, he's worked so hard for this and he brought it home like the great champion he is!”

If you're looking for support or more information about premature births, stillbirths or miscarriage, Tommy's have a free helpline 0800 0147 800 (open 9 – 5, Monday to Friday).

10/15/2021 Celebrities Comments Off on Paris Fury opens up on two ‘devastating’ miscarriages: ‘Something I’ll never get over’
Recent Posts