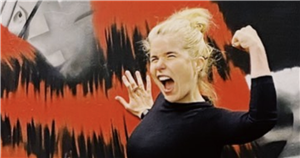 Paloma Faith showed off her midriff as she returned to the gym following the birth of her daughter.

The 39 year old, who recently announced her six week old baby girl was discharged from hospital after suffering from infection, took to her Instagram stories to share a snap of herself dressed in gym gear.

The mum-of-two looked gorgeous in a pair of a high-waisted leopard print leggings alongside a black long-sleeved crop top.

She completed the look with some grey trainers as she put her arm in the air to show off her bicep and pulled a winking face for the camera.

Paloma posed alongside her trainer Sarah Lindsay, who dressed in a pink hoodie, grey leggings, white trainers and a grey baseball cap.

The Only Love Can Hurt Like This hitmaker wrote over the image: "First day training with this beauty @roarfitnessgirl @roarfitnessldn #postpartumrecovery #mamabacktowork".

The Blonde beauty gave birth to her second child with her partner Leyman Lahcine in February this year and the pair are already parents to an adorable daughter.

It comes as Paloma recently discussed the "guilt" she felt returning to work less than three months after giving birth.

In a candid "postpartum diary" post, the singer tweeted she had a "lump in her throat" because she thought her children "wouldn't be looked after properly".

Sharing two striking images of herself breast-pumping, Paloma wrote: "I did a bit of work this week. My first two days back. The first one was ok. The second I had a lump in my throat the entire time.

"I was snapping at Leyman I didn't know why. I remember this feeling well from my first [child]. Guilt mixed with concern that they won't be looked after properly.

"Turns out she was fine. I wasn't! Hahaha! Working mums returning to work: It always feels too soon, whether you are back like me after 11 weeks, or if it's a year."

In a further tweet, the Gold hitmaker admitted that her worries as a mother might never subside.

"You are never really away because you are thinking about them, texting about them, pumping for them (like in my pics!) I'm going to try and pull a sicky," she continued.

Paloma added: "Only problem is I need about 10 years off to raise my kids hahahaha! And then there’s the dilemma about childcare."