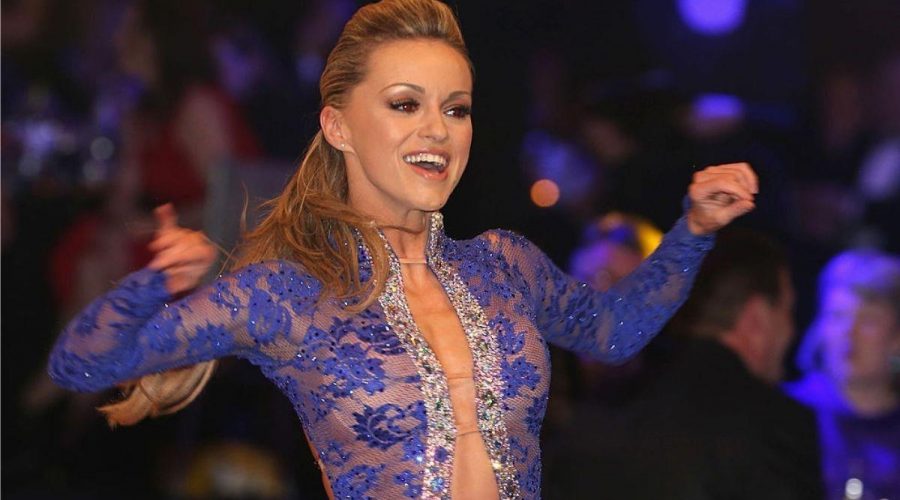 Ola Jordan, 40, and her fellow dancer husband James were left devastated after piling on the pounds following the birth of their daughter Ella, now two, and longed to regain the slim and trim bodies of their youth. Now, however, they have lost a combined 6.5 stone between them, and Ola was delighted to announce that the ultra-sexy outfit she’d been stashing forlornly at the back of her wardrobe now fits perfectly again.

In a video clip posted to Instagram earlier in 2022, the Strictly Come Dancing star sadly confessed that the catsuit she initially wore for a performance with James in 2013 would scarcely fit “half” of her body in it at that point.

“I’m sorting my wardrobes out and look what I found, my – one of my favourite outfits that I used to wear,” she exclaimed.

Then she added: “I won’t be able to fit in it now, it’s like half of my body would fit in but, maybe one day.”

Yet the realisation that she was now much larger than the costume gave her the impetus to get fit again – and the 5ft3in dancer has now slimmed down from a size 14 back to a size 8.

“I’m so glad I kept this in the back of my wardrobe! My classic catsuit!” she declared triumphantly before displaying herself in the glitzy number.

Decorated with sequins and a sheer floral lace print, it features a cut-out section down the middle which leaves very little to the imagination, with even her belly button exposed.

Yet Ola’s body confidence has increased dramatically since her weight loss, leaving her comfortable to flaunt the outfit.

With her arms outstretched, fans could see emotion etched on her face as she transformed from gutted to triumphantly glamorous.

“Back in the summer I dug [the catsuit] out as motivation to keep me going when we’d both decided we needed to get off our bums and make a change,” she told her 319,000 avid followers.

However, she added: “I didn’t think I’d ever be able to get back in it!”

She quizzed her fans about whether they’d like to sign up for her weight loss plan, available via the recently launched website she shares with James, Dance Shred.

“Maybe you have something in your wardrobe you’d like to get back into? Let me know what – maybe your wedding dress?!” she asked.

“It’s a great way to keep you focused if you’ve decided this is the year you’re going to get fit and healthy.”

It comes after some fans slammed Ola’s husband James after he made scathing comments about her figure.

He’d said he’d preferred her slimmer and that all men would feel the same way about their own partners – but insisted her weight gain didn’t mean he loved her any less.

Some blasted James for the remarks, while Ola defended her other half, insisting that he was simply being “honest” – even after he’d jibed on Instagram that he would have “needed a crane to lift her”.

“People now preach body positivity, and they accept it, but I really missed my old self and that’s not just my body,” she explained of her decision to lose the extra weight.

“I missed my old self. There’s nothing wrong with admitting it,” she insisted, before adding: “I feel like I’ve lost a whole person!”

Fans have been divided over her transformation, with some praising her and saying her transformation had inspired them to do the same, while others insisted the former Strictly pro looked fine before losing the weight.

She admitted on Instagram that she’d been so unhappy, she’d even turned down invitations to go out as she was concerned about her figure.

An “unflattering” photo of herself and James sporting “mum and dad bods” in their swimwear by their pool also caused her embarrassment.

“I wasn’t happy although I tried to pretend that I was,” she admitted in a candid Boxing Day post as the pair showcased their new look for 2023.