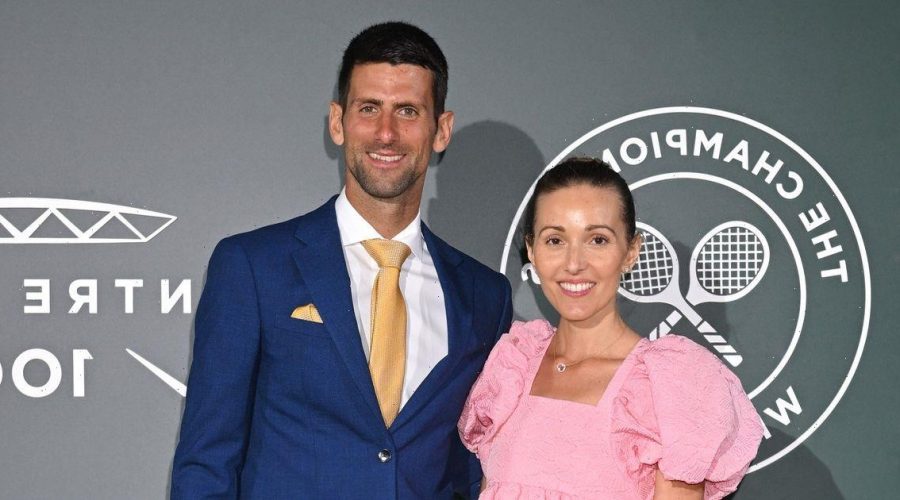 Wimbledon champion Novak Djokovic had much to celebrate along with his title win on Sunday as it was also his eighth wedding anniversary to his wife Jelena.

The 35 year old sportsman marked both occasions in sharp style as he attended the Wimbledon Champions Dinner on Sunday night with Jelena, 36, who looked effortlessly glamorous stood next to her husband.

Novak achieved his seventh Wimbledon win and fourth conservative title after he beat Australian opponent Nick Kyrgios on Centre Court on the final day of the annual tournament.

The tennis star beamed as he arrived at the dinner to celebrate and wore a blue suit with a white shirt underneath and a yellow tie, a pocket square in matching colour and a pair of polished brown lace-up shoes.

Novak was pictured arm-in-arm with wife Jelena, who dazzled in a light pink babydoll mini dress with giant puffy sleeves, which she paired with white heeled mules.

The stylish entrepreneur wore her hair back in a flattering bun and added a large white Chanel shoulder bag to her ensemble, which worked as the perfect show-stopping accessory to her look. Novak and Jelena married in 2014, a decade after they first began dating in high school, and the couple share two children; son Stefan, seven, and daughter Tara, four.

Jelena was seen with their daughter watching on tensely from the stands on Centre Court as her husband played against opponent Nick in the finals on Sunday.

Novak won after making only 17 unforced errors in the three-hour match and now has 21 Grand Slam titles, one behind fellow Wimbledon star Rafael Nadal.

After his win, the champion made sure to acknowledge his wife and their special day as he said: “I am going to buy you flowers after this. You keep reminding me big things. I will be in big trouble if I forget.”

Novak later told Jelena: “So darling, Happy Anniversary”, as he pointed to his Wimbledon trophy, and added: “This is my present.”

The married couple tied the knot in the grounds of Aman Sveti Stefan Resort in Montenegro eight years ago in a romantic ceremony in front of friends and family.

Jelena gave a loving tribute to her husband in return on social media marking their eighth anniversary, as she wrote: “8 years married out of 17 years of growing up together #nottoobad #nevergettingold #love.”