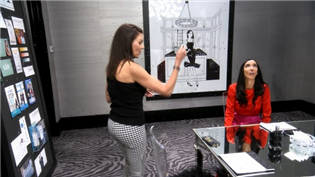 The Real Housewives of Orange County star Noella Bergener is showing how much she deserves her Orange.

After dominating episodes and headlines with her shocking and shady surprise divorce, she’s locking horns with Heather Dubrow.

Instead of screaming at each other, the two exchange polite smiles … and a flurry of insults.

On this week’s episode, Noella called Heather a “complete narcissist” while Heather called Noella a “psycho.”

Noella arrived at the sprawling Dubrow residence, ready to film a scene together.

Heather, however, was a little tied up at the moment.

She and her husband, famed surgeon Terry Dubrow, were busy filming an infomercial.

As Noella immediately understood, this was not a coincidence.

She wasn’t just “dropping by” — Heather had invited her over and it was all scheduled.

Heather wanted the cameras to see what she was up to, and wanted Noella to see it, too.

After making Noella wait silently while they concluded filming, Heather took her aside to her “lair.”

While we don’t begrudge anyone calling a room their “lair” (especially someone with Heather’s level of supervillain energy), the decor was … interesting.

You know how some people will do a room where everything’s decorated with animal print, or floral patterns, or Star Wars stuff? Heather’s decor is Heather.

Everywhere is plastered with photos of Heather, and some of the pamphlets and clippings on the walls are difficult to decide.

“This is my only quiet spot,” Heather says, despite the loud decor.

While the room is clearly ideal for recording a podcast, Noella cannot help but comment — to the confessional camera — on how it makes her feel.

“I had my suspicions before,” Noella admits, “but this is pretty concrete evidence.”

Describing the podcast studio, she continues: “This is a shrine to a complete and really, really good narcissist.”

“This is thorough,” Noella almost praises. “If I weren’t so creeped out, I’d be impressed.”

After exchanging some polite questions and answers, it’s time to get confrontational.

Heather has heard through the grapevine that Noella called her a “phony” or perhaps a “fake bitch.”

Noella confesses to her that she did say that during her lunch with Friend of the Housewives Nicole.

“I knew going into that lunch I was very raw, I was very emotional,” Noella admits, obviously referring to her jarring divorce.

“The person I’m really angry with obviously is James,” she emphasizes of her ex.

“But your name got brought up,” Noella confesses, “and it was literally like, ‘F–k phony bulls–t.’ I lashed out.”

Noella agreed with Heather that it was a case of “misplaced aggression” during a very difficult time.

Heather explained her reaction: “I was like, ‘She’s going through a lot. I’m going to let that one go.'”

Of course, that was not the only issue.

Then of course came the infamous “not to be trusted” debacle.

Basically, Noella felt that it was creepy and weird how quickly and effectively Heather and Terry seemed to get any and all talk of a “botched” boob job lawsuit to drop.

She clearly felt that the two had managed to forcibly silence the topic — an impressive feat for reality stars, to be honest.

Heather was weirded out, in turn, by Noella bringing it up, feeling like she was getting was “psycho vibes.”

The conversation ended up going to an oddly mature place, however, with the pair resolving that they are better off not being friends.

“You have a lot going on in your life right now and I don’t take it personally,” Heather said. “Having said that though, I’m not sure I’m the right friend for you.”