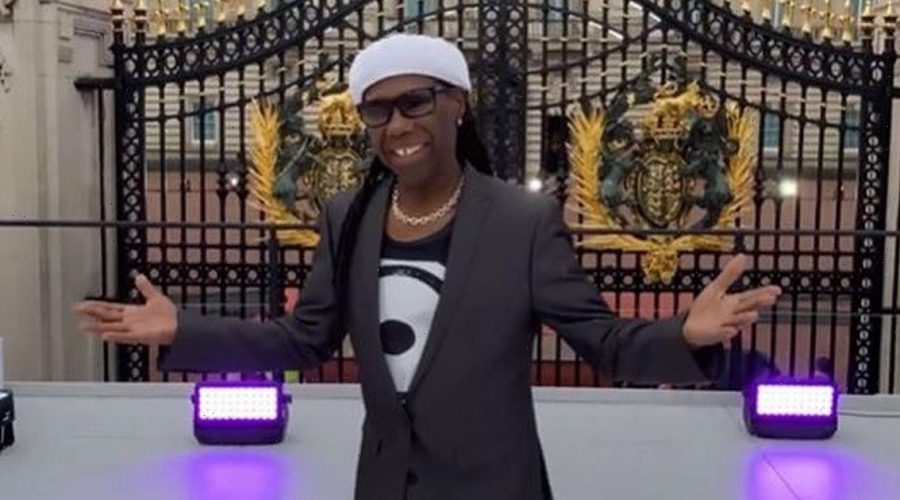 Nile Rodgers has shared a sneak peek at the jaw-dropping stage for this evening’s Party at the Palace.

The event, located outside Buckingham Palace, is set to kick off at 8pm, where some huge musical names will perform.

People have been working hard to resurrect the large T-shaped stage, which goes right up to the Palace gates.

Some eager fans were already standing waiting by the stage hours before the event begins, with Nile briefly chatting to them and assuring the small group that “it’s going to be great”.

In the video, the music legend continues to walk down the stage to end up standing in front of the gates where he makes a peace sign towards the Palace.

He then quips: “Don’t think I’ll ever get a shot like that again.”

The Platinum Party at the Palace will see a huge number of high-profile stars take to the stage in, for some, the performance of their lives.

It's only fitting that Queen and Adam Lambert kick off the historic event as the opening act, 20 years after guitarist Brian May performed on the roof of Buckingham Palace for her Golden Jubilee.

And while a bit of We Will Rock You is enough to satisfy the masses, there are a further 17 acts, including the UK's newest Eurovision breakout star, Sam Ryder.

Other acts include George Ezra – who Kate Middleton is said to be a fan of – Ella Eyre, Elbow and Duran Duran.

Diana Ross, who is back performing in the UK for the first time in 15 years, said ahead of tonight’s show: “I have had the honour of meeting The Queen many times throughout my life, including when I was with my family.

“Her Majesty has and continues to be such an incredible inspiration to so many across the world and I was absolutely delighted to receive an invitation to perform on such a momentous and historic occasion.”

With the Queen having pulled out of two Jubilee events already, it’s unclear whether the 96 year old monarch will be in attendance this evening.

Her Majesty pulled out of the Thanksgiving service yesterday, Friday 04 June, and went on to cancel her appearance at today’s Epsom Derby as well.

Announcing that she wouldn’t be at the Thanksgiving service, a spokesperson for the Palace said: "The Queen greatly enjoyed today’s Birthday Parade and Flypast but did experience some discomfort. Taking into account the journey and activity required to participate at St Paul’s Cathedral, Her Majesty with great reluctance has concluded that she will not attend.”