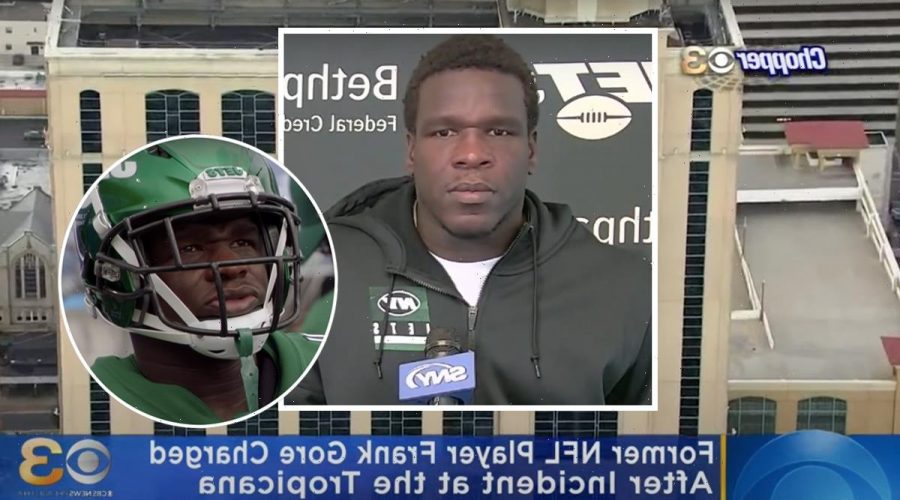 The athlete was involved in a July 31 New Jersey incident where he allegedly “forcibly” grabbed a woman by her hair before “violently dragging her nude person along the floor of the 59th hallway,” according to court documents obtained by TMZ Sports. Yeesh.

The Atlantic City Police Department informed the outlet that they were called to the Tropicana Atlantic City at 8:11 a.m. regarding a domestic violence report. They added that a 28-year-old woman, who they did not identify, was seen with hotel security, but “did not exhibit signs of injury and complaints were not filed at the time.” No arrests were made wither.

We wonder what her reasoning was behind not reporting the incident? We hope it wasn’t something to do with her trying to protect Frank, which is unfortunately often the case with abuse victims.

“An ensuing investigation resulted in Franklin Gore being charged with simple assault related to the domestic violence incident.”

Sheesh… Simple assault often carries misdemeanor penalties and covers both threats of physical harm and/or the actual act of a physical assault resulting in minimal injuries. It sounds like, as brutal as the act was, the poor girl came out pretty unscathed.

“Gore was issued a summons pending a future court date. The public is reminded that charges are mere allegations and the accused is considered innocent until proven guilty.”

TMZ is reporting that the running back will appear for the court hearing in October. He has yet to publicly acknowledge the situation himself. ACPD concluded their release by asking anyone with insight into the situation to come forward:

“Anyone with information about this incident is urged to contact the Atlantic City Police Department Criminal Investigations Section at 609-347-5766.  Information can be text to tip411 (847411).  Begin the text with ACPD.  All texts are anonymous.”

See the full report (below):

The 39-year-old is widely known as one of the NFL’s best running backs of all time, coming in number three as an all-time rusher with 16,000 yards, 99 total touchdowns and finishing his career rushing 653 yards in 15 games with the New York Jets in 2020. He then signed a one-day contract in June of this year with the San Francisco 49ers to retire there, and is now pursing a career in boxing.

What do you think of the situation, Perezcious readers? Should Frank be charged? All we can say is we hope that poor woman stays far away from him!

08/11/2022 Celebrities Comments Off on NFL Star Frank Gore Charged After Allegedly Dragging A Naked Woman By Her HAIR Through A Hotel Hallway!
Recent Posts