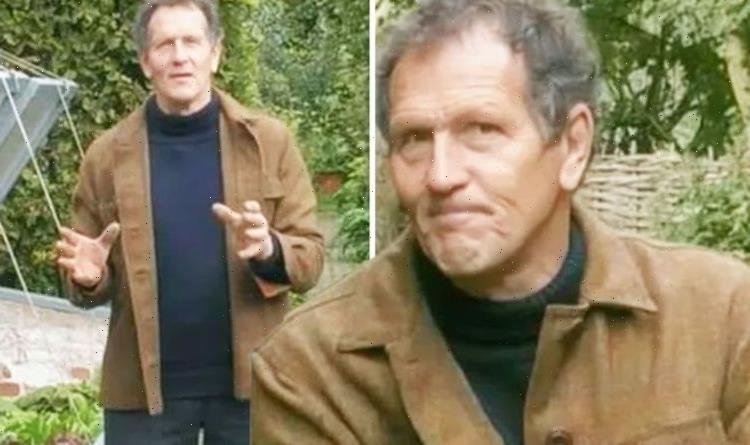 Gardeners’ World: Monty Don reveals he’ll be back in a fortnight

Monty Don, 66, confirmed last week he wouldn’t be in the next episode of Gardeners’ World, as he takes some time off away from the programme. The horticulturalist, who has fronted the BBC programme since 2003, has now taken to Twitter to share how he has been spending his downtime, which left some social media users baffled.

The 66-year-old is known for his expert gardening tips but it seems the presenter could have his eye on a new venture.

Taking to the micro-blogging site, Monty admitted he has been having a “blissful time” working on his farm during his time off from the show.

In view of his 237,000 followers, he penned today: “Back at work after a week just working in garden and on farm. Blissful. Filming tomorrow and weds, writing today.”

Monty accompanied the post with a candid snap of his beloved Jewel Garden at his Herefordshire home.

Some fans were left slightly confused by the BBC presenter’s farming admission.

One quizzed: “You have a farm as well? Gosh you’re a busy man.”

“Do you own your own farm as well?” another commented.

A third quizzed: “You have a farm?”

Another fan of the gardening presenter, chimed in: “Was news to me too, apparently a sheep farm for the last two decades.”

“Never been a secret,” a fifth person added.

Monty is not only the proud owner of his stunning garden, but also has a sheep farm.

The BBC host regularly visits his hillside holding, which is located in Llanthony Valley in the Black Mountains.

Meanwhile, the nature guru announced at the end of last week’s instalment of Gardeners’ World that he’d be taking a break, bidding viewers a farewell and announcing that others would be stepping in.

At the end of Friday’s episode, Monty commented: “I shan’t be here next week – I am taking a week’s holiday, which I haven’t done for ages.

“And I know I’m going to spend it potting around here in the garden – heaven.”

But fans of the show will be pleased to know there will still be a new instalment airing this week.

The BBC favourite continued: “And of course, there will be a programme which will be hosted by Carol [Klein] and Nick [Bailey], who will be looking at how to make every space count.

“And that will be on at 8 o’clock next Friday – and I will be back here with you at Longmeadow in a fortnight.”

Gardeners’ World airs on BBC Two at 9pm on Fridays.