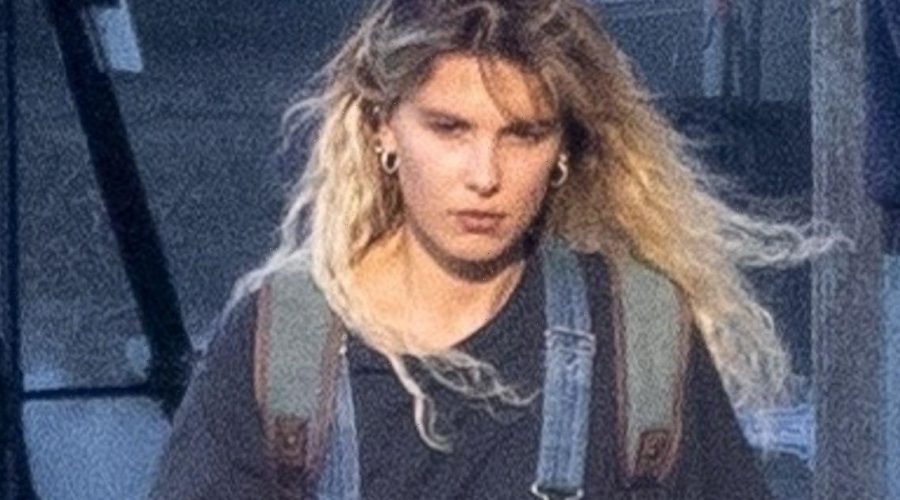 Millie Bobby Brown has been spotted looking worlds away from her usual glamorous self as filming for upcoming movie The Electric State gets underway.

The Stranger Things actress, 18, portrays an orphaned teenager who journeys across the American West in search of her younger brother in the new movie, which also stars the likes of Chris Pratt, Michelle Yeoh and Anthony Mackie.

Millie, who recently opened up about her 'real adult relationship' with Henry Cavill, was seen filming scenes for the sci-fi thriller in Atlanta, Georgia on 19 January.

The 18 year old wore a black t-shirt with a long sleeve white top underneath and had a purple plaid shirt tied around her waist.

Millie sported minimal make-up aside from statement dark lipstick and carried a green backpack as she filmed scenes for the film, which is based on the graphic novel by Simon Stålenhag.

The Electric State is due for release sometime in 2024 and tells the story of an orphaned teenager who sets out looking for her missing brother, and is joined a sweet but mysterious robot – who she realises was sent by her brother.

The duo are then joined by an eccentric drifter on the journey in 'an imaginative world of humans mixing with all manners of robots, uncovering a grand conspiracy in the process', according to the synopsis.

Millie's transformation comes after her Stranger Things co-star Finn Wolfhard opened up about the pair's first on-screen kiss and responded to Millie's comments about his kissing technique.

Millie previously said Finn's kissing "sucks" and in a video for Vanity Fair, she was asked: "Is Finn just a lousy kisser?" to which she replied: "He is."

Finn, 20, who plays Mike Wheeler in the hit Netflix series, has since addressed her claims in an episode of The Drew Barrymore Show, which aired on 19 January.

The actor he was "fine with it", and explained: “My first on-screen kiss was with Millie, but I didn’t know how to approach that in any way.”

He continued: “There was no just like, ‘You’re gonna do this thing, and at the end of the take, you’re gonna kiss her.

“The romantic way of putting it was that I headbutted her. But I was 12, so, you know, I probably would have done the same thing if I was not on screen in front of the entire world.”