A love triangle could be brewing! Miley Cyrus serenaded Pete Davidson on ‘The Tonight Show,’ hilariously saying it ‘should have’ been her on some of his recent dates with Kim Kardashian.

Miley Cyrus declared it “should have been” her instead of Kim Kardashian on those recent date nights with Pete Davidson! The Hannah Montana alum hilariously serenaded Pete, 28, on The Tonight Show with a cover of Yvonne Fair’s “It Should Have Been Me” — adding in some specific details about his new romance with the SKIMS founder, 41. “I said, it should have been me — ohhhhh, it should been me,” she belted out, before stating, “Pete Davidson, how you gonna do this to me?”

“It should have been me in that Lamborghini leaving that nice a– restaurant,” she then hilariously said, pointing to a blushing Pete. Miley was, of course, referencing the Saturday Night Live actor’s recent outing with Kim to Santa Monica’s famed Giorgio Baldi. Pete was allegedly sporting a hickey as the two left the eatery on Nov. 22 in a Lamborghini SUV reportedly belonging to Pete. 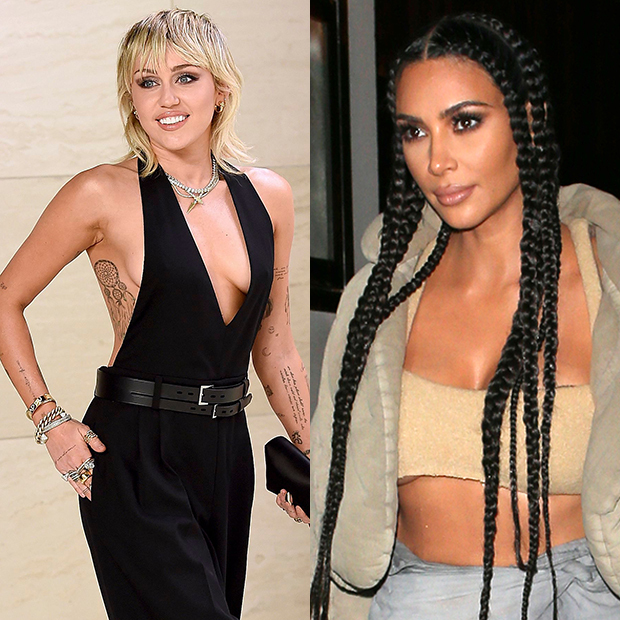 “I want to watch a movie in freaking Staten Island…oh yeah, it should have been me,” the 28-year-old singer went on as Pete covered his face and sheepishly looked over at confused host Jimmy Fallon. On another recent NYC date, the comedian took Kim to his home borough for an outdoor rooftop dinner where they soaked in the views of Manhattan. “Baby, how could you do this to me?” she then asked Pete, singing over The Roots playing in the background.

Miley looked incredible while performing in a black cat suit with cutouts for the appearance, featuring a halter style top. She accessorized with layered hold bracelets for some bling!

She then finished by singing, “Miley’s New Years’ Eve! What the f–k,” and dropping the mic. The pair were on Jimmy’s show to promote their upcoming NBC and Peacock special, Miley’s New Years Eve Party special, which is set to air Dec. 31. The program will be filmed in Miami, and be a “variety” show with plenty of musical performances and laughter, Miley promised.

12/10/2021 Celebrities Comments Off on Miley Cyrus Hilariously Shades Pete Davidson & Kim Kardashian’s Romance: ‘Should Have Been Me’
Recent Posts