Miley Cyrus took to Instagram to share an eye-catching clip of herself flaunting a figure-flattering black one-piece swimsuit and added the cheeky caption, ‘Made ya look.’

Miley Cyrus, 28, is getting her fans’ attention with a new video! The singer shared a quick clip that showed her mostly from the neck down as she leaned forward and then back in a black one-piece thong swimsuit. She took a moment to adjust the side straps before the clip cut off and was rocking what appeared to be blonde locks.

In addition to the memorable clip, she posted a promotional pink photo of herself singing into a microphone for her upcoming gig at Summerfestm a music festival set to take place in Sept. It had her name over the pic as well as “special guest” The Kid Laroi, who is also listed on the roster for the festival.

In addition to the post, she shared a cheeky photo of herself from the backside to her Instagram story. “‘Y’all really scarred me w/ that turkey b*tt sh*t,” she wrote over the photo, referring to her 2013 MTV Video Music Awards performance in which she wore a flesh-colored bikini top and bottom and twerked. Viewers quickly compared her to a turkey because of her outfit and dance moves. 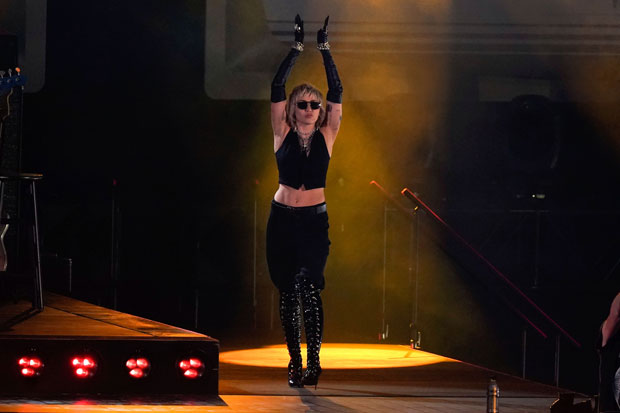 She spoke out about how the comparison affected her during an Instagram Live last year. “I basically went through two or three years where I wouldn’t wear shorts,” she said. “All this sh*t because after the VMAs, where I had on my cute little nude bodysuit, everyone started comparing me to a turkey and putting a turkey in my outfit.

“I was just so skinny and pasty, and I was feeling so bad on myself that I did not wear a bikini for two years,” she added. “I was just starting to understand myself as an independent person, and it was just really, really hurtful to be so body-shamed like that. It really affected me in my personal life.”

Luckily. Miley hasn’t let the haters stop her from performing and doing what she does best. Her appearance at Summerfest takes place at the American Family Insurance Ampitheater in Milwaukee, WI on Sept. 17.