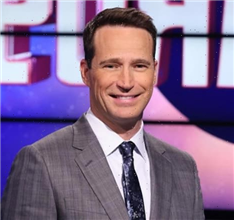 Imagine holding public auditions of beloved, often famous people for a new job … only to pick yourself for the gig.

Now imagine having so many skeletons in your closet that you lost that new job and your old one after widespread backlash.

If your name is Mike Richards, you don’t have to imagine. This is your life.

Not only is he out as the new host of Jeopardy!, but after nearly universal condemnation, he’s no longer an executive producer, either.

On Tuesday, Sony announced that Mike Richards is no longer an executive producer of Jeopardy! … or of Wheel of Fortune.

As the parent company behind both shows, Sony was responding to a series of chaotic weeks for the beloved quiz show.

Richards went from executive producer to the unwelcome surprise new host to former host over a very short time.

After Mike Richards was first announced to fill the shoes of the late, great Alex Trebek, there was widespread confusion.

After all, many had just watched numerous people audition through a guest host role.

Whether people wanted LeVar Burton for the role or a familiar Jeopardy! face or were still unsure, they wondered who this Richards guy was.

Unfortunately for Mike Richards, the world found out exactly who he is.

He has been named in multiple discrimination lawsuits.

Additionally, derogatory comments that he has made on a podcast came to light, earning widespread condemnation.

Almost equally relevant was the inherent weirdness of Richards taking the job in the first place.

It’s another to give the world the impression that you watched them all only to decide that you, personally, were best qualified.

It fell to Executive VP of business and strategy at the two shows, Suzanne Prete, to email the staff with the news.

“We had hoped that when Mike stepped down from the host position at Jeopardy! it would have minimized the disruption and internal difficulties we have all experienced these last few weeks,” Prete wrote.

She acknowledged: “That clearly has not happened.”

Michael Davies is the CEO of television production company Embassy Row, which is owned by Sony.

He will be helping with production on an interim basis.

“Michael and I will work together with all of you in the weeks ahead,” Prete wrote.

“I know this has been a challenging time for the entire team,” she acknowledged.

“And,” Prete continued, “I want to thank you all for your cooperation and professionalism over these last few weeks.”

Richards was the subject of a lawsuit in 2010 following his treatment of Brandi Cochran, a model on The Price Is Right.

The lawsuit accused him of having a hostile reaction when she became pregnant, one that amounted to discrimination.

Claire McNear of The Ringer did what few of us would dare to attempt, reviewing 41 episodes of a podcast that he hosted in 2013 and 2014.

He made sexist, body-shaming comments about women and their bathing suits.

He made derogatory remarks about little people and about Jews.

Unfortunately, this is not Jeopardy!‘s only host issue.

Mayim Bialik was named as the first guest host and had already been selected as the host of the show’s prime time specials.

However, she has made alarming comments about vaccination, and her victim-blaming comments amidst #MeToo are difficult to forget.

09/01/2021 Celebrities Comments Off on Mike Richards OUT as Executive Producer on Jeopardy, Wheel of Fortune
Recent Posts