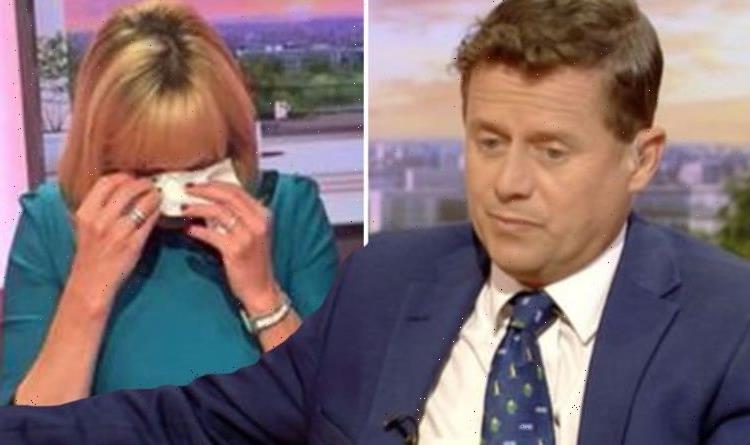 BBC Breakfast: Louise Minchin is 'trying not to think about' last day

Mike Bushell, 55, bid a tearful farewell to his long-time co-star Louise Minchin, whose last ever BBC Breakfast show airs this morning. After 20 years on the red sofa, the presenter decided to was time to hang up her boots and it’s fair to say she will be very dearly missed by viewers and her colleagues.

Don’t miss this everyone. Going to be special

Mike’s tribute comes after the show’s editor Richard Frediani, shared a sweet snap of the pair together.

Alongside the photo of them smiling at the camera, he wrote on Twitter: “It’s the final @BBCBreakfast with @louiseminchin on Wednesday.

“I’ve been lucky to be her boss for 2 years, but known her for many more.

“On behalf of our viewers to Louise. Thank you.”

Mike seemed to agree that her final on-screen appearance was going to be a tear-jerking one, and urged viewers not to miss the show.

“Don’t miss this everyone. Going to be special,” he tweeted.

“I’ll be walking the dog early before watching on. And I know everyone from every part of Louise’s journey will be glued too starting as we did @BBCSouthToday @BBCBerkshire @BBCBreakfast.”

Yesterday, Louise appeared in her regular spot alongside co-host Dan Walker and admitted she was trying her best to not think about the fact it would be her penultimate outing on the show.

But on Tuesday’s episode, Dan couldn’t help but ask her how she was feeling ahead of her last day.

As the programme drew to a close, Dan swiftly asked: “Ready for your final day tomorrow by the way?”

Clearly taken aback by the question, Louise smiled and said: “I just – as I said I’m trying not to think about it.”

“Okay, well so am I,” Dan confessed, causing Louise to burst out laughing.

“That’s it from us this morning. I will be back tomorrow one last time!” she exclaimed.

The presenter also shared her emotions with fans on Twitter, writing: “Good morning, penultimate sofa selfie. Goodness me. I can’t quite believe it! #BBCBreakfast.”

Viewers were quick to reply noting how sad they were to see her go, with one penning: “Oh, Louise! It really is going to be so sad tomorrow.”

Another added: “Good morning, I can’t believe its all coming to the an end of an era tomorrow.”

“Going to record it tomorrow as I will miss some due to work but will have my tissues ready when I get back and watch it. Will miss you @louiseminchin,” a third commented.

BBC Breakfast airs weekdays at 6am on BBC One.