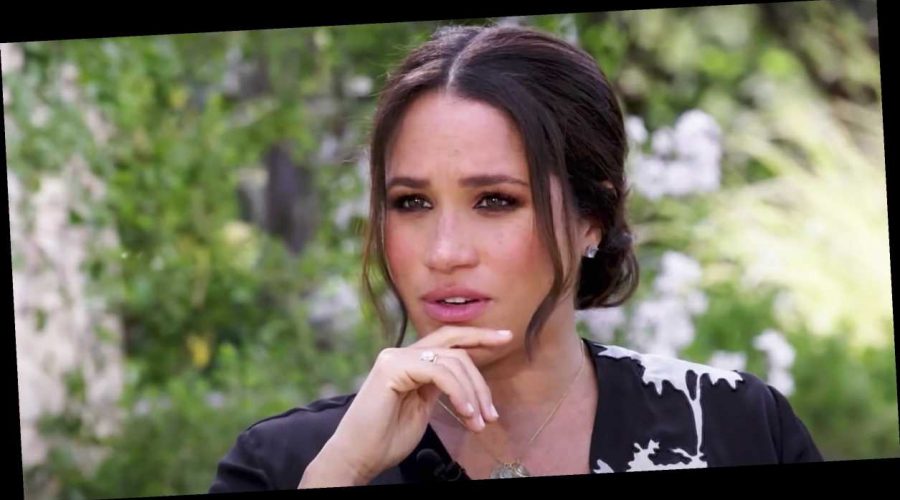 Meghan Markle and Prince Harry’s tell-all interview is still three days away, but the CBS sit-down is already causing a stir. In the latest sneak peek from the special, the Duchess of Sussex alleges that the British royal family has helped spread lies about the couple.

Prince Harry and Meghan Markle’s Tell-All: What to Know

“I don’t know how they could expect that after all of this time we would still just be silent if there is an active role that the firm is playing in perpetuating falsehoods about us,” the 39-year-old former actress, who is pregnant with baby No. 2, says in a clip released on Wednesday, March 3. “And if that comes with risk of losing things, there is a lot that has been lost already.”

During the Sunday, March 7, interview, Meghan and Harry, 36, are expected to address a series of topics for the first time since stepping back from their royal duties in January 2020. (The couple made their exit permanent last month.) In another sneak peek of the 90-minute CBS primetime special, Harry alludes to his late mother, Princess Diana, revealing that he was concerned about “history repeating itself” with his wife and 21-month-old son Archie.

“For me, I’m just really relieved and happy to be sitting here, talking to you, with my wife by my side, because I can’t begin to imagine what it must have been like for her going through this process by herself all those years ago because it has been unbelievably tough for the two of us, but at least we have each other,” Harry says.

While members of the royal family, including Queen Elizabeth II, Prince William and Duchess Kate, have yet to publicly comment on the duo’s upcoming interview, sources told Us that Harry’s family isn’t happy about it.

According to one source, the Duke and Duchess of Cambridge are “appalled” by Harry and Meghan’s decision to speak out. “It’s just beyond the pale for William and Kate, especially in light of the dreadful timing with [Prince] Philip in the hospital,” the insider said, referring to the 99-year-old prince, who remains in the hospital after undergoing surgery for a heart condition. “They are utterly aghast.”

Leading up to the interview this month, The Times reported allegations that Meghan was unkind to her palace aides and staff. While the duchess denied the allegations, noting in a statement to Us Weekly on Tuesday, March 2, that she was “saddened” by the “latest attack on her character,” Buckingham Palace released a statement on Wednesday revealing that the Royal Household is looking into the accusations.

Prince Harry and Meghan Markle’s Exit Drama: Everything to Know

“We are clearly very concerned about allegations in The Times following claims made by former staff of The Duke and Duchess of Sussex,” the statement read. “Accordingly our HR team will look into the circumstances outlined in the article. Members of staff involved at the time, including those who have left the Household, will be invited to participate to see if lessons can be learned The Royal Household has had a Dignity at Work policy in place for a number of years and does not and will not tolerate bullying or harassment in the workplace.”

According to a second source, Harry and Meghan’s inner circle believe that the palace’s reply to the claims is a direct response to the upcoming interview.

“The assumption from friends close to Meghan and Harry is that the palace has released this statement to strike back at Harry and Meghan for doing the [tell-all] interview,” the source said. “The palace knows that they will not be cast in the best light by Harry and Meghan on Sunday and doesn’t want Harry and Meghan coming off as victims.”

03/04/2021 Celebrities Comments Off on Meghan Accuses Royal Family of ‘Perpetuating Falsehoods’ About Her, Harry
Recent Posts