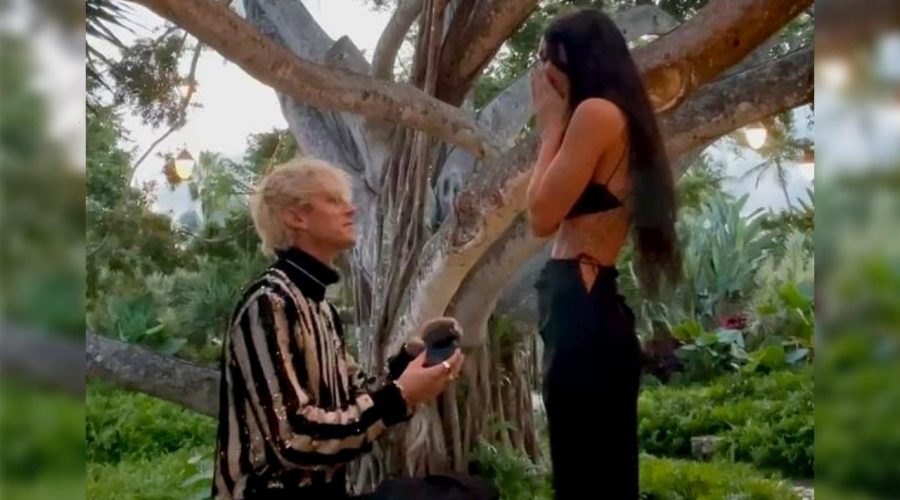 The newly-engaged couple is accused of ‘normalizing’ abuse after the ‘Bloody Valentine’ rapper revealed that the ring he gave to the ‘Transformers’ actress has thorns so it hurts when she takes it off.

AceShowbiz –Machine Gun Kelly‘s romantic gesture to Megan Fox has led to a debate among social media users. The couple, who has been proudly displaying their dark and grungy romance, has sparked concern after the rapper revealed the engagement ring he gave to her has thorns so that it would “hurt” when it’s taken off.

Many have since weighed in on Twitter about a potentially harmful message that could be sent with the thorned ring design. For example, one saw it as “possessive and controlling.” Another accused the couple of “normalizing abuse for attention.”

Writer and producer Kim Caramele told her followers, “Just a friendly reminder that love is NOT pain.” She elaborated, “That’s a damaging message that allows abuse & toxicity to be misinterpreted for love. Love is wanting each other to be happy & to feel good … Pain is never the barometer. I promise.”

Someone explained how unpractical the ring design is for day-to-day life. “I take my wedding ring off to protect it, like when I wash my hands or work with chemicals. So Megan can’t take it off for basic things like that without being stabbed? How romantic,” that person pointed out.

Another agreed as saying, “Like, even if you’re into that, this is just impractical. You need to take your ring(s) off all the time to do basic tasks. Plus I imagine she can’t be wearing it while acting? Like consenting adults can do what they like, but they don’t really need to tell everyone and there should be at least a little thought behind it.”

MGK proposed to Megan on January 11. The couple announced the news on social media “to control the narrative.” Speaking to Vogue, the rapper described the ring, “It’s a thoroughbred Colombian emerald, with no treatment. It was just carved into the teardrop, straight out of the mine. And the diamond was directly from Stephen (Webster).”

“The concept is that the ring can come apart to make two rings,” he continued explaining. “When it’s together, it’s held in place by a magnet. So you see how it snaps together? And then it forms an obscure heart. And you see this right here? The bands are actually thorns. So if she tries to take it off, it hurts…”