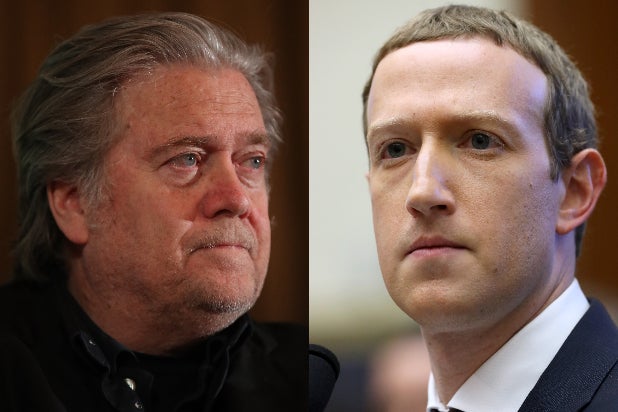 Facebook chief executive Mark Zuckerberg said Thursday that when former Trump adviser Steve Bannon called for the beheading of Anthony Fauci and FBI Director Christopher Wray in a video last week, he did not violate enough of the company’s policies to justify his account being suspended.

According to a recording of a Facebook all-staff meeting on Thursday obtained by Reuters, Zuckerberg said that Bannon “came close” but “did not cross the line” that would have led to an account suspension. (The company took down Bannon’s video but allowed his page to remain up.)

“We have specific rules around how many times you need to violate certain policies before we will deactivate your account completely,” Zuckerberg said, according to Reuters. “While the offenses here, I think, came close to crossing that line, they clearly did not cross the line.”

In the video, which was posted across Facebook, Twitter and YouTube, Bannon was discussing what Trump should do in a hypothetical second term as president for his online talk show. After saying that Trump should fire both Fauci and Wray, Bannon said he wanted to go even further.

“I’d actually like to go back to the old times of Tudor England. I’d put the heads on pikes, right? I’d put them at the two corners of the White House as a warning to federal bureaucrats, you either get with the program or you’re gone,” Bannon said.

The video was taken down by all three platforms last week. At the time, YouTube said it was also suspending Bannon’s account for “at least a week,” according to Bloomberg, while Twitter took a step further and permanently suspend Bannon’s account. Facebook did take down a “network of other Bannon-linked pages that were pushing false claims about the presidential election,” Reuters reported, but Bannon’s main page has still remained up.