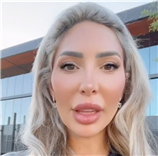 Earlier this week, Farrah Abraham hit the town with a mystery man — and she obviously wanted the whole world to know about it.

The pair went to a popular Hollywood sushi restaurant and made out on a park bench, all in front of an army of paparazzi.

We later learned that Farrah’s new man was a musician named Mack Lovato.

Of course, because Farrah’s life is a non-stop roller coaster, by the time this information went public, the relationship was already over.

Farrah told several media outlets about the breakup, because of course she did.

She told TMZ that Lovato became a “monster” when he started receiving the attention of the press.

She told E! News that she worried her daughter, 13-year-old Sophia, would not approve of Mack.

All of this apparently came as a major surprise to Mack, who was not even aware that he was in a relationship with Farrah.

In a new interview with The Ashley’s Reality Roundup, Lovat says he was never in a relationship with Farrah, and he claims that she’s lying about their “breakup.”

“I met Farrah on Bumble in 2020 and we took her pup Billionaire to a dog park. I most definitely did not ‘slide in her DMs,’” Mack told The Ashley.

“To be fully transparent I wasn’t even aware of her fame when we initially met (not that it matters). I asked her if she wanted to hang again but, barring a random DM convo we had about the Grammy’s a year or so ago, we didn’t speak until last week,” he continued.

“It was surprising to wake up and discover I had acquired a girlfriend overnight because I certainly never agreed to that … with anyone.”

Mack says that Farrah got upset and blocked him when he had the audacity to point out that they were never actually dating.

“I sent Farrah a text to clarify this, and to also let her know that I was under the impression something like that was a mutual decision… she then proceeded to serve me some words and block me,” he continued.

“Anyways, if Farrah had asked, I would of told her I was fairly fresh off a break up with my ex Antonia and that when you still love someone it’s not the best move to rush into things.. especially after only spending a total of 2 days together in the physical form.”

Mack went on to say that he harbors no ill will toward Farrah and is speaking out only for purposes of setting the record straight.

“All of that being said, I want to make it clear I really do wish Farrah the best,” he told The Ashley.

“We initially bonded over the loss of a loved one and I know she’s been thru a lot. These past couple days have really been an eyeopening experience for me,” Lovat added.

“Besides being utterly confused as to how 2 people going on a date and kissing is newsworthy (especially with all that’s going on in the world) my next biggest takeaway was the dark extent of this cyberbullying bullsh-t we got going on.”

Mack went on to encourage Farrah’s haters to be more tolerant and more mindful of the comments they make on social media.

“People insulting Farrah’s mental state, physical appearance, calling her horrible names, telling me to run, to head for the hills… enough is enough. We gotta to do better. We need to be kinder. I know I certainly can,” he said.

“Nobody’s perfect. And despite what anyone may say Farrah’s a great Mom who loves her daughter to death. She’s raising a great kid, and she’s doing it alone as a single Mother,” Lovat continued.

“So to anybody who feels the need to try to break them down to build themselves up, please keep that in mind. Ask yourselves if you would say these things to your own mother, daughter, wife, or anyone you care about.”

It’s true that we could all learn to be a bit more compassionate.

Of course, Mack’s comments are a little ironic, as no one could benefit from his words quite as much as Farrah, who’s basically made a career out of bullying others.

06/09/2022 Celebrities Comments Off on Mack Lovat: Farrah Abraham LIES! She Was Never My Girlfriend!
Recent Posts