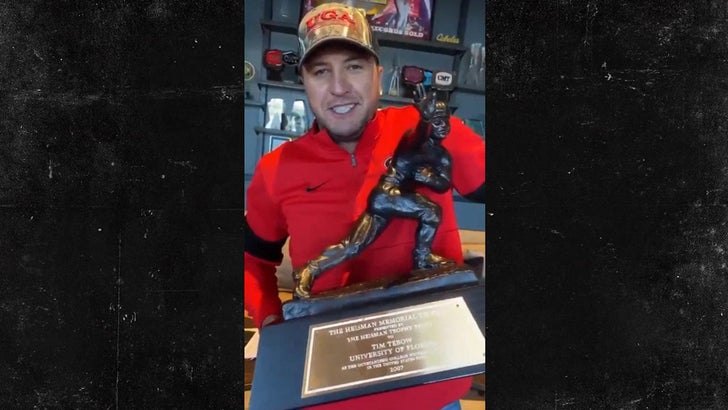 Luke Bryan just took the Georgia-Florida rivalry to a whole ‘nother level … the country music superstar is now using Tim Tebow‘s Heisman Trophy to cast a curse on the Gators!!!

Bryan — a BIG Georgia fan — revealed Thursday he and his wife won the rights to the trophy for 6 months at a charity auction last year … donating cash to the Brett Boyer Foundation in exchange for the honor.

The thing is … Tim waited until this week — just days before the Gators-Bulldogs game on Saturday — to deliver the award, and Bryan said he believes something was fishy about the timing of all that.

“I feel it was an effort to bring bad mojo into my household,” said Bryan, who seriously LOVES the Dawgs.

So, what did Luke do to combat that???

Bryan says he’s now going to use Tim’s trophy to try to will his Dawgs to a win over the Gators … explaining, “I’ve got this all week to put a curse on the Florida Gators!”

Kickoff is set for 3:30 p.m. ET in Jacksonville … and, if the Gators start doing some funny things — BLAME LUKE!!!