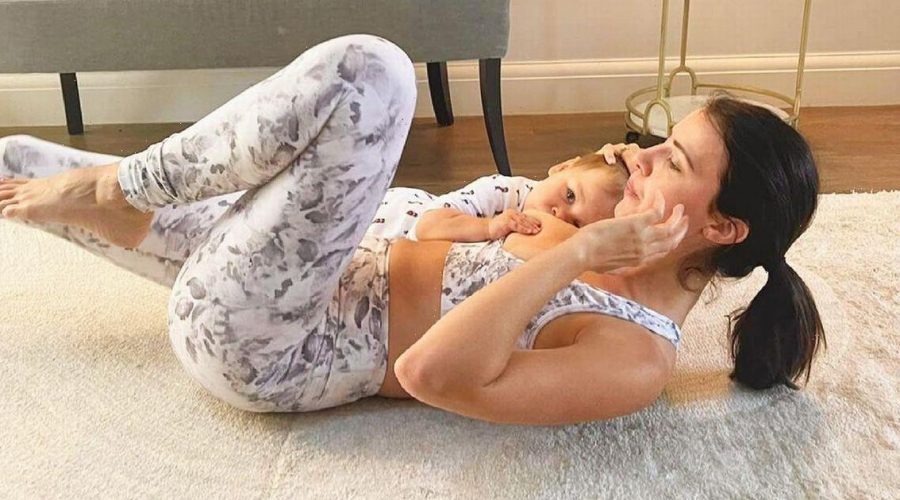 Lucy Mecklenburgh has been praised as she shared a candid photo of herself working out while breastfeeding her son Roman.

Former The Only Way Is Essex star Lucy, 29, said the moment was "multitasking at its best" as she shared the photo with her 1.7million fans.

In the image mum-of-one Lucy, who shares son Roman with Ryan Thomas, can be seen laying on the floor in a grey and white floral patterned two-piece gym-wear set.

Lucy, who recently shared a video of her son Roman walking, looks gorgeous without any makeup on in the photo while her hair is tied back for her morning exercise routine.

Mum Lucy is seen in the middle of doing some crunches while laying on a plush grey rug and her son Roman, one, is feeding from her left breast.

As she posted the photo on her Instagram page, she wrote in the caption: "Mama multitasking at its best!!

"Bicycle crunches & breastfeeding," followed by a series of laughing, clapping and heart emojis.

She then added that her fiancé Ryan, who recently wowed fans with his daughter Scarlett's singing voice, was the photographer behind the image.

Lucy wrote: "so glad @ryanthomas84 got this photo! I love it".

The candid photo shared by Lucy received more than 14,500 likes from fans, while many commented to share how in awe they were of Lucy's multitasking abilities.

One fan marvelled: "That is impressive" alongside a heart eye emoji.

Another cheered: "Go Mama" next to a bicep flexing emoji and pink heart emoji.

While a third asked: "How on earth do you do that?! I struggle with my chunk balanced on a pillow!"

Lucy also shared a video of herself working out while her son Roman played with a truck in the living room of their home.

As she posted the clip on her Instagram story, she told her followers: "The reality of working out with a toddler hahah".

Former TOWIE star Lucy also shared another photo of herself posing in the same workout gear while posing in the mirror as her son Roman crawled around her feet.

Ryan and Lucy got engaged in summer 2019, but the pair revealed earlier this year their wedding is on the "back burner".

Speaking about the plans for their nuptials, Lucy revealed to OK!: "It's definitely on the back burner. It's been a tough year for everyone and with us having a baby, it's definitely not a focus. We just don't know how long it's going to be until the world feels a little bit more normal."