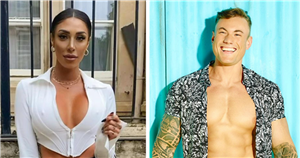 Love Island star Tom Powell has revealed he is dating Married At First Sight Australia's Tamara Joy – and she's even flown to Wales to live with him.

The 29 year old sat down with former Big Brother contestant Simon Gross on his Love Island Extra Instagram show to discuss the current season of the hit ITV2 show, where he found fame back in 2016.

Turning to his life in the Valleys now, Tom was quizzed on who is currently coupled up with on the outside world.

Tom admitted during their chat: "I'm dating someone off Married At First Sight.

Get exclusive Love Island stories and fabulous updates straight to your inbox with OK!'s daily Factor 50 newsletter. You can sign up at the top of the page.

"Do you know the Australian Married At First Sight? So, Tamara [Joy] off there.

"She's flown over from Australia. She's been here for a month, six weeks now. She's in the other room over there."

However, when Simon asked if Tamara could come onto camera, Tom cheekily admitted: "I don't know if she has clothes on, so I don't really know if I can."

"It was obviously hard with her living in Australia and then Covid happened, all this, because in an ideal world we'd be in Australia, not Wales.

"We wanted to be in Australia, but she said 'enough's enough', caught a flight and got over here and she's been here about six weeks now."

Tom shot to fame on Love Island in 2016 after coupling up with Sophie Gradon, who tragically died by suicide in June 2018.

When asked by Simon if he thinks he and Sophie could have worked out in another world, Tom said: "Yes, possibly.

"But we both became famous very quickly and had no time to see each other. We spoke to each other on FaceTime every week.

"We spoke to each other every week without fail and she would FaceTime me. She was the kindest soul I have ever met."