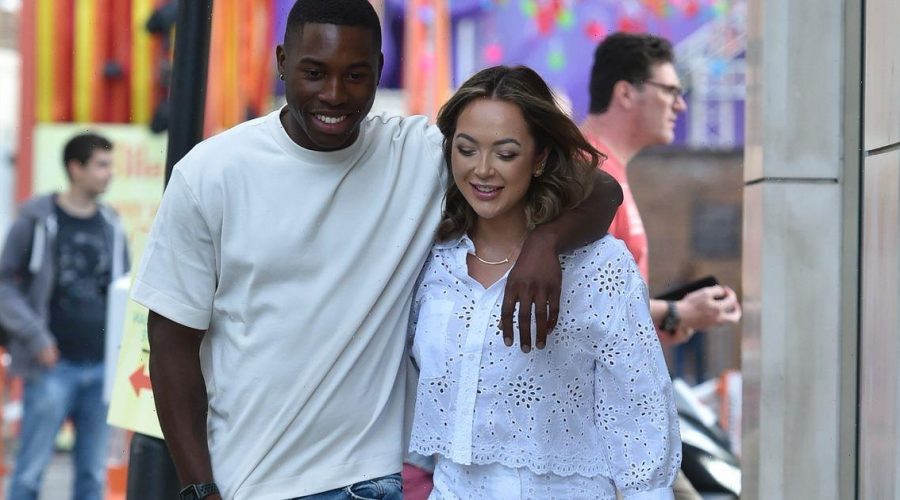 After finishing their run in the Love Island villa as singletons, it seems Sharon Gaffka and Aaron Francis have been spending time together back in the UK.

The pair – who were once coupled up on the ITV2 show – were seen together leaving The Prince restaurant in Chelsea, London with their arms around each other and laughing.

Sharon, 25, had a white broderie anglaise co-ord set on with matching white trainers, adding a pop of colour to the look with a pink handbag.

Aaron, 24, was more casual in his outfit, wearing a white T-shirt and ripped jeans with a pair of black trainers.

The pair seemed to be enjoying each other’s company after leaving the restaurant, both smiling as they walked.

The images come after Aaron and former love interest, 21 year old Lucinda Strafford, confirmed that they were officially friends in a joint interview with Christine Lampard on Monday’s Lorraine.

Aaron said: “We were only coupled up for like three or four days. So, we're like "alright guys, calm down," but obviously it's easy to misinterpret.”

Aaron shared in the interview that he was sad to have missed out on Casa Amor while Lucinda spoke about her rekindled flame with 26 year old Brad McClelland.

Lucinda said of Brad: “Yeh I met up with Brad. It's still early stages at the moment. But yeh, we'll see how things go.

“I had a good connection with him, but our time got cut short. It's early stages. It's up in the air at the moment.”

Brad was Lucinda’s first choice when he arrived at the villa, with the pair sadly being divided as audiences voted them least favourite.

It was up to Brad and Lucinda who would have to leave, with Brad deciding to sacrifice himself so that Lucinda could stay for longer.

Sharon was recently seen revealing that producers on Love Island were using a secret hatch to feed the girls after the boys had been eating all the snacks.

Speaking to The Sun, she said: “It is a cat flap but there's a magical box on the other side of it, rather than a cat.

“The girls loved the cat flap so much because that's also where we got our makeup dropped.”