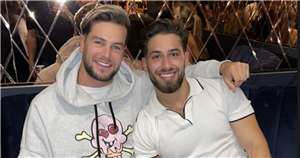 Love Island's Chris Hughes and Kem Cetinay got on like a house on fire when they first crossed paths on the hit dating show in 2017.

And fans of the hilarious duo are over the moon to see that the stars' bromance is still going strong five years on after Chris, 28, and Kem, 25, reunited for a night out.

The stars were seen smiling at the camera as they enjoyed a drink or two with Chris looking so happy to be catching up with his best friend.

He was pictured holding a cocktail in one hand while putting his arm behind Kem as they posed for the snap.

Chris wore ripped denim jeans with a grey hoody, while barber Kem wore a pair of smart trousers with a white polo.

The star captioned the post on his Instagram story with the words: "Always a pleasure," with a love heart before tagging Kem.

During their time together on the show, Chris was partnered up with his ex-girlfriend Olivia Attwood, while Kem went on to win the series with his ex Amber Davies.

Chris and Kem may not have found love with Liv and Amber, but their bromance has stood the test of time.

Fans will recall the lads' close bond from the very beginning as we saw them having each other's backs throughout the show and even sharing a kiss during one challenge.

The pair also landed an unexpected and short-lived music career as they released Little Bit Leave It after the final.

Alongside a snap of the two of them sharing a kiss on holiday, Chris began to share on Instagram: "Don’t know where to start. Last night of our first holiday away. I didn’t think I’d meet someone like this.

Chris added: "It’s the closest feeling I’ve had to being in school again, when you crush hard and kind of don’t know what to do.

"The kind of girl, when I’d expect to get home from school and speak to on msn as the nerves got the better of me in the playground. I’m lucky, and I’m blessed, and I’m thankful @annabeldimmock."

Made in Chelsea's Proudlock commented: "Love my bro!"

"This makes me so happy bro!" Strictly's Karim Zeroaul added.

For all your updates on Chris Hughes, sign up to our daily OK! newsletter.