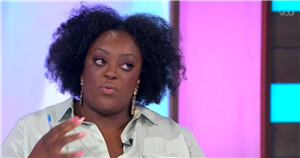 Judi Love fought back the tears as she discussed the extent of her previous financial problems.

Speaking with her co-hosts Charlene White, Nadia Sawalha and Jane Moore on Monday's instalment of Loose Women, the 41 year old admitted that it was the generosity of a stranger pulled her through the "frightening time".

"Christmas came, and I had something like £87," Judi said after explaining she was a single parent raising two children while working a zero-hours contract job.

Judi continued: "I had these two kids, I had the bills and my debts that accumulated from just trying to take care of my kids. I wasn't out partying, I just wanted to look after my kids."

Giving further context, Judi explained that her beloved mother had passed by this stage, so she couldn't even turn to her for help.

Judi sought help from a loan firm, who devastatingly informed her that her credit rating wasn't strong enough to take a loan out in her name.

"This is the place you'd go to when you ain't got nothing," Judi admitted.

But she then explained what happened next changed everything.

"You know what this woman did? She got the loan out in her name, she gave it to me. It's just one of those moments where you can't believe you're in that situation."

Judi's story had viewers at home weeping, with one tweeting: "Im in complete tears… Got to love judi love. So real #loosewomen @1Judilove."

"Just when I thought I couldn't love judi anymore, her honesty on money management really had me glued to the screen #loosewomen", a second said.

A third tweeted: "You can tell Judi is so down to earth. I like her a lot. #LooseWomen."

Meanwhile, Judi went on to offer advice to others going through a similarly tough time.

"We've all been through different stuff and anybody that's dealing with debt," she said.

She urged people to seek help, adding: "There's places and people that you can go to."

As well as a Loose Women panellist, Judi is now a successful stand-up comedian and radio presenter, as well as an OK! columnist.