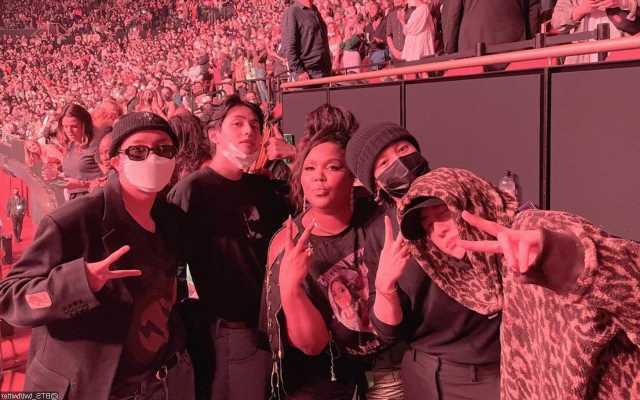 In other news, rapper Cardi B reveals in a new interview that she was supposed to be releasing a new song with the popular South Korean group but the plan falls through.

AceShowbiz –Lizzo definitely had a blast at Harry Styles‘ concert in Los Angeles on Friday, November 19. In addition to the amazing show put by the One Direction member, the “Truth Hurts” singer had some fun with her new “besties” BTS (Bangtan Boys).

Lizzo shared on her Instagram account a few pictures posing with BTS members V, Jungkook, Jimin and J-Hope at the concert. “Me & my besties… swipe for #VMINZZO content,” so the award-winning songstress wrote in the caption.

BTS’ official Twitter account also shared the pictures on their page. “We met @lizzo,” so the account wrote alongside a heart-eye emoji. Reposting the pictures, Lizzo tweeted, “Did we just become BFFs?” 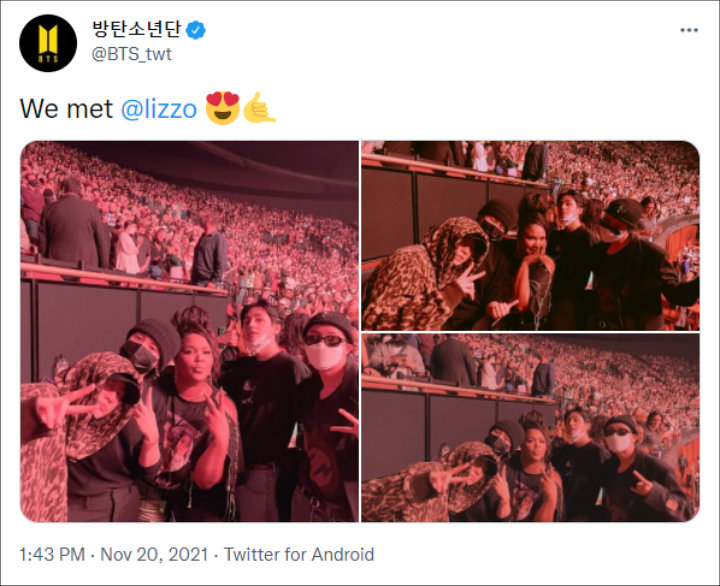 BTS and Lizzo hang out at Harry Style’s concert.

In other news, Cardi B revealed in a new interview that she was supposed to be releasing a new song with the South Korean group. “I was supposed to be on a record with them, but I had just released a record and then it was going to smash with the time,” the “Bodak Yellow” hitmaker told Variety. “But I love them.”

Further gushing over the “Butter” hitmaker, the “Invasion of Privacy” artist added, “I like BTS a lot, but let me tell you something. My daughter [Kulture] likes BTS a lot a lot. Like, ‘Mommy, mommy, put [on] the song.’ And it’s like, I already know what she’s talking about.”

BTS, meanwhile, continued to have a successful music career. The group was one of the biggest winners at the 2021 American Music Awards which took place at Los Angeles’ Microsoft Theater on Sunday, November 21. They collected three awards at the annual event, including Favorite Pop Duo or Group, Favorite Pop Song for “Butter” as well as Artist of the Year.

11/22/2021 Celebrities Comments Off on Lizzo Hangs Out With ‘BFF’ BTS at Harry Styles’ Concert in L.A.
Recent Posts