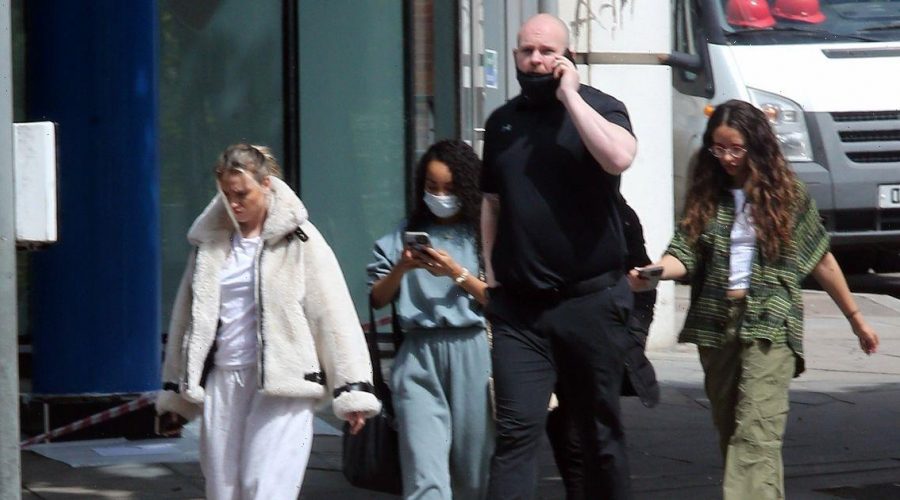 Little Mix were spotted out and about in Nottingham on Tuesday following back to back performances at the city's Motorpoint Arena.

Perrie Edwards, Leigh-Anne Pinnock, and Jade Thirlwall were joined by a burly bodyguard as they headed for lunch at Latin American restaurant Las Iguanas.

Despite the warm weather Perrie, 28, wrapped up warm in a cream fleece jacket, which she wore with a white T-shirt, matching joggers and trainers.

He was pictured wearing all black and lifted his arms after onlookers began photographing the band members.

Photos show the bodyguard raising his arms and looking directly into the camera as Perrie, Leigh-Anne and Jade walked behind him.

The new photos come just as it was revealed on Tuesday that Perrie, 28, revealed that she's on 'vocal rest' after being struck down with a throat infection.

Perrie took to Instagram to reveal she's resting her voice and even requested that nobody converse with her.

The mum-of-one held up a small badge which said: "Vocal rest… please don't talk to me! Thank you kindly."

She then captioned her snap, writing: "For why I suddenly sound like 2011 Perrie!

"No my tonsils haven't come back, no we are not back in the DNA era… I have a throat infection."

After starting their Confetti tour in April the pop trio will finally end their tour of the UK with three final performances in London's O2 Arena.

It will be the group's final performance as they before they embark on their break as a band.

Speaking to BBC One Show host Alex Jones, Jade Thirlwall was struggling not to cry in her last interview with Little Mix.

With plans to focus on their solo music and family life, Perrie and Leigh-Anne in particular are looking forward to a break from the Little Mix machine, though it comes as the trio recently vowed to "reunite" within three years.

Alex, 45, asked what she will miss the most about being in the band.

"I will miss everything!" an upset Jade replied. "We cry laughing every day, we spend all of our time together so I think we will miss that, being in each other's company all the time.

"That sisterhood will never be lost but I will miss having them next to me 24/7.

"We want to say thank you to all the fans for the last ten years, we are so grateful.

"That last show on Saturday will feel so special, we still pinch ourselves we have made it this far," the star added.

Mum-of-twins Leigh-Anne went on to say she was surprised how quickly the "end" had arrived as they gear up to complete their last few tour shows.

"The last tour shows have been incredible being in front of thousands of fans it has been so emotional and we have come to the end so soon," she explained.

"It's sad but they have been amazing. We are doing a global live stream of the 02 show on Saturday so you can all watch it on your computers."

Jade insisted that despite the sadness of having a break from Little Mix the girls will always be friends and stay close.

"What's so lovely is that whatever we do moving forward we will have each other to support each other," she added.

"For 10 years we have been in this group supporting each other and that is not going to change now once we start doing our own thing."

The band have been through a rollercoaster over the last few years, and it all began when former member Jesy Nelson made the explosive decision to quit the group.

After suffering with her mental health for years, the now solo-singer decided she needed to make the change for her own sanity and peace of mind.

For all the latest TV and Showbiz news, sign up to our daily newsletter here.