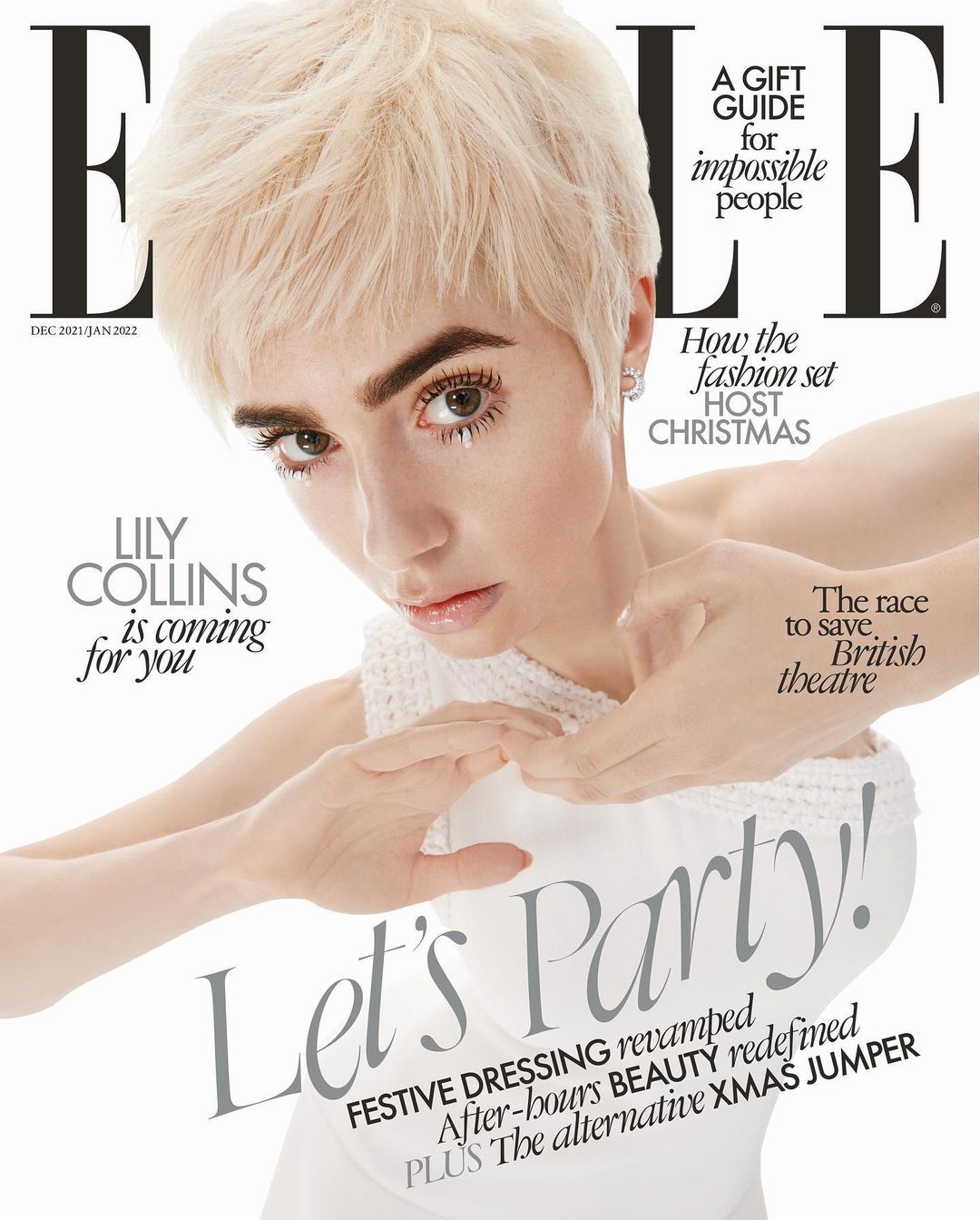 One of the things that I didn’t see about Lily Collins’ personality over the years is that she’s really Type-A. She comes across as someone quiet, driven, hyper-organized and like she has all of her sh-t together. She’s not unemotional or anything, but she has plans and she’s in charge and she made a schedule. That’s what really came across in this Elle UK cover story for the December-January issue, where she’s promoting Emily In Paris’s second season. The photos are ghastly and I hope she never works with these stylists again, but the interview was quite nice. Some highlights:

Being back in the UK: ‘It’s been almost two years. And usually I would be coming back a lot. And Charlie too – before we even knew each other [his father is the British actor Malcolm McDowell]. We would come during holidays or for vacations and we came here together last at Christmas two years ago. So we’re both like, “Oh my god, it’s good to be back.”’

Whether she’s more British or American: ‘I am British. I mean, I’m both, but I associate more with being British. When I play roles with British accents, there’s something about it that feels like I’m speaking naturally, even though I’m having to put it on. Whenever I land here, I feel like I’m coming home. Especially after not being able to for years. Just even hearing the accent when we boarded the plane [yesterday], there’s just such a comfort in it.’

The criticism of the Emily In Paris especially with diversity: ‘For me as Emily, but also as a producer on [the show], after season one, hearing people’s thoughts, concerns, questions, likes, dislikes, just feelings about it, there were certain things that spoke to the time that we’re living in and what’s right, and moral and correct and should be done. And [that was] something that I felt passionate about. [The producers] all believed in the same things. And I really wanted diversity and inclusion in front of and behind the camera to be something that we really put our focus on, in a lot of ways. Hiring new people in front of the camera, also giving new storylines to different characters, which was really important.’

How she handled lockdown: ‘I hadn’t been home for that amount of time for a very long time, and without knowing what’s next. It was very valuable time for me to spend with my now-husband and our dog, to be able to just exist and take the time to just sit and be quiet. Because I am someone who innately feels guilty for not doing something. I love to work. I’m a doer. So also I was able to kind of transfer what one considers work into self-work. I am also someone who is a huge advocate of mental health, of therapy, of meditation, of journaling, whatever it is that speaks to somebody in their process of finding out who they are, or bettering oneself or learning about oneself and expanding their mind and heart. So I really used that time for deep, deep, deep, sometimes very uncomfortable reflection, because we were having to stop and look at things.’’

On her dad, Phil Collins: ‘Starting out, when I was younger, I had lots of things taken out of context in interviews. I couldn’t be a more proud daughter, a more loving daughter. Like, it’s my dad! I love him and I am in awe….[Individually] I’ve always wanted to be me, and to have my own path and my own journey and my own failures and successes and all those things, like any individual wants. And, at the beginning, when I hadn’t done any of those things yet, I was anticipating people only being interested in my family. Of course, that’s the way in which the world works and a lot of media works. But I got frustrated being asked those questions. It didn’t mean that I didn’t love or respect my dad, it doesn’t change how I felt about my family. I just really didn’t want that to be my narrative.’

“I mean, I’m both, but I associate more with being British…” But isn’t her “natural” accent American/Californian? It is! Although she’s likely bidialectal, she says herself that she has to “put on” the British accent, meaning it’s more of a conscious choice. Still, she’s a dual citizen and she can identify however she wants. As for what she says about diversity on Emily in Paris… she’s a producer on the show, and in other articles, I’ve heard the newly-diverse writing team and new cast members say that Lily really does “get it” and she used her power to strive to be more inclusive and supportive of diverse voices. So even if what she says here comes across a little bit PR-speak and word-salady, I kind of trust that her heart is in the right place.

12/07/2021 Celebrities Comments Off on Lily Collins on being British-American: ‘I associate more with being British’
Recent Posts