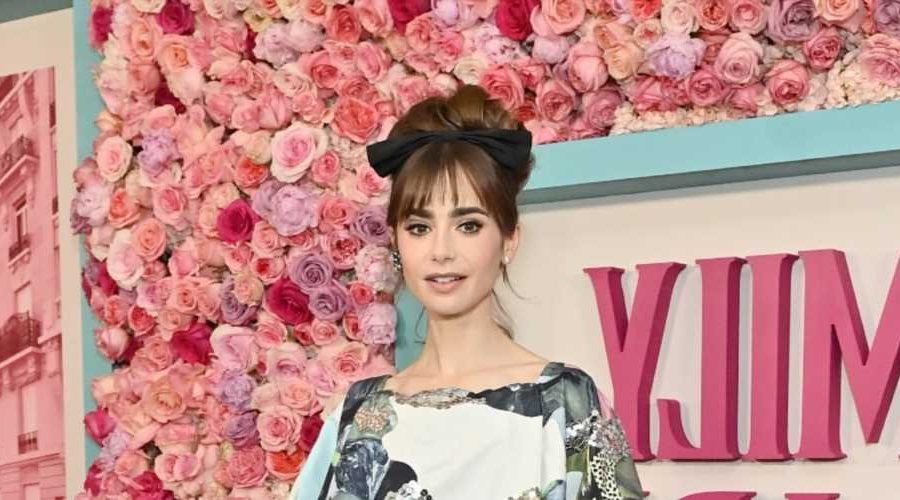 Lily Collins channeled Twiggy at her latest red carpet appearance, and just like the '60s icon, the actress' look for an Emily in Paris Season 2 screening was totally mod.

Collins, who stars as fish-out-of-water Emily in the cult-favorite show, opted for a printed micro mini bubble dress that puffed out before tapering in at her legs with a thick band (with pockets!) She paired the retro dress with an updo of the same era: a smaller-scale beehive look with a skinny black bow and bangs. She accessorized with statement earrings, black sheer tights, and matching patent-leather platform heels.

At one point, Collins was joined on the carpet by her costar and real-life bestie Ashley Park, who also chose a throwback geometric mini dress with stockings and platforms.

It's only fitting that the pals, who also play friends in the show, would bring their fashion A-game to the carpet. After all, both their characters are known for their Parisian-chic looks — even if it's sometimes a little too on the nose.

"My thing is just to make my actors happy, and for them to be interesting and original instead of trendy," Emily in Paris (and Sex and the City) costume designer Patricia Fields told InStyle last year. "I have a tendency of making up these outfits that are not necessarily something you've seen before, but still hold some interest. Because that's what lasts in a wardrobe, it really does."

Emily in Paris season 2 premieres on Netflix Dec. 22 and will pick up with a girls trip to St. Tropez and, of course, more memorable looks, work-related drama, and French hotties.