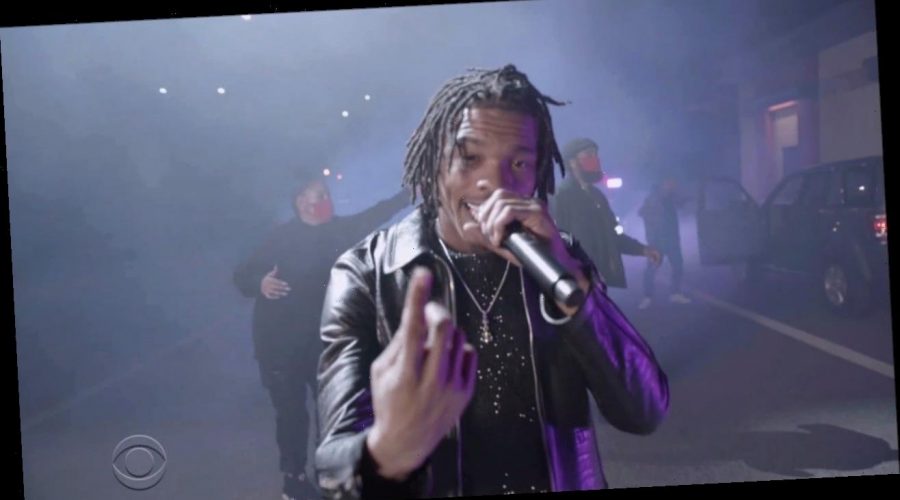 Lil Baby brought protest art to the GRAMMYs on Sunday with a powerful performance of his song, “The Bigger Picture.”

The striking number made its message clear from the opening moments, in which two white police officers approach a Black driver (played by Kendrick Sampson), whom they attempt to detain before they shoot the unarmed man when he attempts to run.

The number is set to the backdrop of protests against police brutality and calls for justice, as Lil Baby performs while walking in the street as an observer while the city around him descends into protest and builds to increasing conflict.

Lil Baby might have just given one of the most powerful Grammy performances ever👏🏾👏🏾👏🏾 pic.twitter.com/jUl3jqDZ3w

After the shooting, witnesses begin to gather and soon a man throws a Molotov cocktail through the window of a restaurant, evoking images of the shocking fatal shooting of Rayshard Brooks in Atlanta in June, which was met with protests and demonstrations.

As the song progresses, the imagery changes to a police lineup and then a protest rally with Black Lives Matter signs, as real-life activist Tamika Mallory delivers an impassioned plea for support and institutional change.

“It’s a state of emergency. It’s been a hell of a year. Hell for over 400 years. My people, it’s time we stand, it’s time we demand the freedom that this land promises,” Mallory declares from behind a podium surrounded by protestors. “President Biden, we demand justice. Equity, policy, and everything else that freedom encompasses. And to accomplish this, we don’t need allies, we need accomplices. It’s bigger than black and white. This is not a trend, this is our plan: Until freedom! Until freedom! Until freedom!”

Killer Mike joined the performance for a verse as the narrative built to a confrontation with a line of riot police, and culminated in a fireworks show that took on a much more somber tone as it felt like it represented the explosion of tensions that always seems to be required for cultural change.

“My performance is important to me and I had to make sure it was right. Nominations aside, actually performing ‘The Bigger Picture’ means the most to me,” Lil Baby said in a press statement released after his appearance. “I paint pictures with my songs and wanted the performance to bring that picture to life.”

“Just like with the song, this performance had to reflect the real. No sugar-coating,” he added. “My family, my fans and my city know who I do this for.”

Get the complete GRAMMYs winners list, plus GRAMMY Awards live updates at ETonline.com.