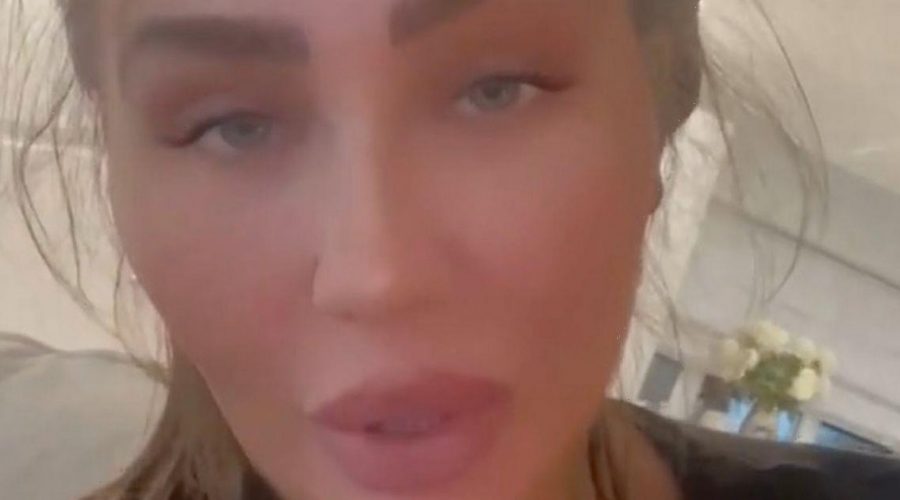 Lauren Goodger, 35, has opened up on why she has started to give her baby, Larose, solids.

Taking to Instagram Stories, the gorgeous mum-of-one, who recently showed off her Christmas tree, could be seen cradling her sweet daughter as she shared with her 788,000 followers that "stress" had affected her.

"I'm a breastfeeding mother, she feeds on demand, but I spoke to a couple of midwifes – NHS and private – trust me, I longed this out as long as I could.

"I've been through quite a lot of stress lately and my milk flow was low and she was really hungry so I thought do I give her less milk or feed her.

"I've obviously gone for the healthier option and fed her. These products and food, you can have from four months.

"I'm not giving her full on meals. I've given her a little bit of mushed up banana, no added sugar rusk which she absolutely loved and those Ella's Kitchen pouches that are organic.

"Then I'm going to make some fresh food for her and mash it up."

Lauren could be seen sitting with her hair in a pony tail with a black t-shirt on, cradling her daughter who wore an adorable pink outfit as they caught up on some I'm A Celebrity… Get Me Out Of Here!

The star showed off some Ella's Kitchen pouches and admitted she was "trialling them out."

Lauren's "stress" comes shortly after it was revealed that she and Larose's dad Charles Drury had gone their separate ways.

A source close to Lauren has told us that she called time on their relationship a while ago – and she’s shocked by the timing of his statement.

“Lauren and Charles split weeks ago,” our source revealed. “They weren’t compatible any more. She’s really stressed as Larose is in hospital with a severe illness. She didn’t expect him to announce the split while she’s going through this really difficult period.”

Our source added: “He’s had weeks to do this – why has he done this now?”

Taking to Instagram Stories, builder Charles, 24, told his followers he and Lauren “have decided to go our separate ways”.

He continued: “Things must remain civil for the sake of our daughter. Lauren is a great mum so when it comes to Larose we both have her best interests at heart so she will still see us both. I’d appreciate if people could stop making themselves busy & putting their 2 pence in as no drama is needed round here.”

It came just moments after Lauren revealed their baby daughter had been in hospital for three days with an illness, thought to be a virus or infection.

She said Larose is now “on the mend”, but admitted it had been the “hardest” days of her life and that she had struggled to sleep. It also appears that the couple are co-parenting, as Lauren revealed they have been taking it in turns to stay with the tot in the hospital.

“It’s been such a scary time for Lauren,” our source said. “Her priority is Larose and making sure she gets better and out of hospital as quickly as possible.”