An editor called the original headline “too glib,” and it was changed 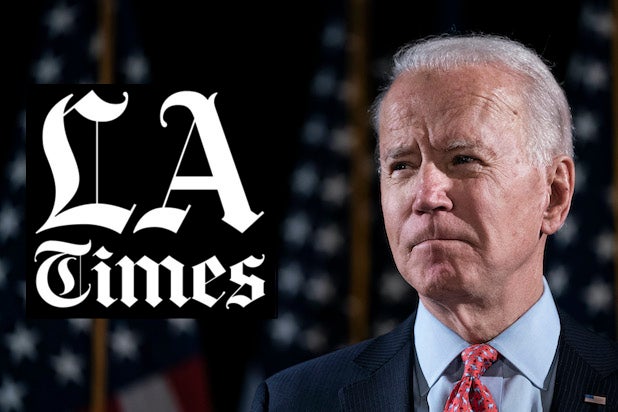 The Los Angeles Times came under fire Saturday after giving a “blatantly sexist” headline to a story about Democratic presidential candidate Joe Biden narrowing his choice for a female running mate.

The headline — which read, “It’s ‘The Bachelor: Campaign Trail.’ Which of Biden’s veep candidates deserves the rose?” — was ultimately replaced.

The L.A. Times got the message loud and clear and made the correction. It now reads, “Column: Biden’s VP search isn’t exactly ‘The Bachelor’ — but it’s generating some strange optics.”

“Thank you to everyone who shared feedback on the original headline of this piece. We understand why it missed the mark, why it was sexist and how it misrepresented the message of the op-ed. It has been changed, and we thank you for pushing us to do so,” the outlet tweeted.

The Times’ Editorial Page editor, Sewell Chan, followed up with a note to Harris, saying, “Maya, we’ve changed the headline online. The column by @page88 is thoughtful, but the original head was too glib. Thanks for giving us a chance to do better.”

The headline was indeed changed, but the contents of the story didn’t get the same attention. Written as an opinion piece by Virginia Heffernan, the article goes on to say, “I’m not saying it’s exactly ‘The Bachelor: Campaign Trail,’ but it’s a little weird to watch an old man set out to choose a younger woman to take to the ultimate fantasy suite, the White House… If she’ll have him. Because the candidates for Biden’s final rose seem to have the upper hand here.”

For many, the deeper meaning behind their criticism was still lost.

“Reducing female political figures –many (all?) of whom have advanced degrees, all of whom have dedicated their lives to public service–to what is essentially a beauty contest is beyond offensive,” wrote one Twitter user. Another wrote, “Seriously. In addition to being absurdly sexist, equating the presidency with a reality TV show (in any harebrained capacity) is part of what got us into this mess.”

You can read the full L.A. Times story by clicking here.

08/09/2020 Celebrities Comments Off on LA Times' 'Sexist' Headline Compares Biden Veep Pick to 'The Bachelor'
Recent Posts
We and our partners use cookies on this site to improve our service, perform analytics, personalize advertising, measure advertising performance, and remember website preferences.Ok