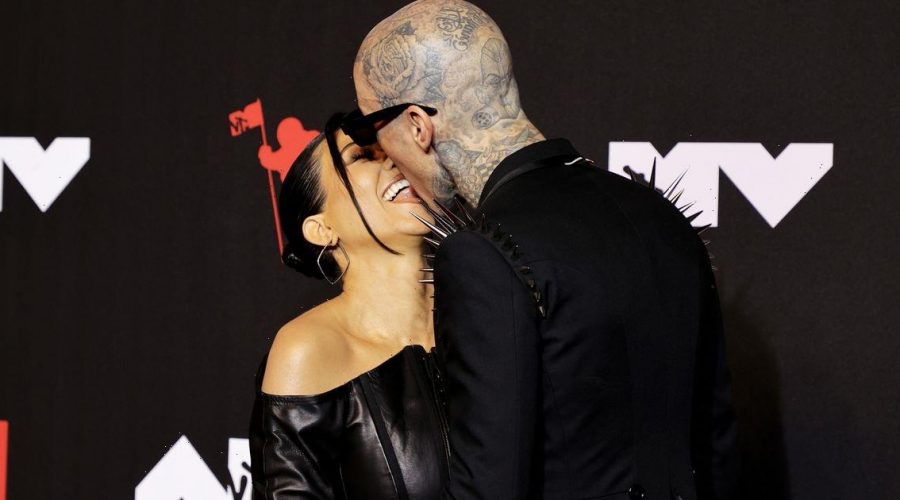 Kourtney Kardashian and boyfriend Travis Barker were very loved-up as they attended the MTV Video Music Awards on Sunday.

The pair hit the red carpet at the Barclays Centre in Brooklyn, New York holding hands and sharing a passionate kiss for the cameras.

Kourtney, 42, sported a sexy leather minidress with a laced-up front to the event, while 45 year old partner Travis went shirtless under a black blazer and matched it with ripped trousers and black sunglasses.

Travis couldn't keep his hands off the KUWTK star as he stood behind her and wrapped his arms around her, as they posed for the cameras.

Travis and Kourtney first made things official in February of this year via Instagram as Kourtney posted a snap of them both holding hands with no caption, that Travis would share to his own account.

Since then the couple have been very open with their PDA and romantic getaways, having only recently returned from a trip to Europe together.

The European vacation had the pair visiting Disneyland Paris and Italy together where their kissing snaps managed to bother Kourtney’s ex partner, Scott Disick.

In the leaked messages, Scott said: “Yo is this chick ok!???? Broooo like what is this. In the middle of Italy.”

While Scott had an issue with the PDA, Younes said he didn’t mind the snaps if Kourtney was “happy”.

Younes replied: “Doesn't matter to me as long as she's happy. PS: i ain't your bro.”

Younes himself had posted the exchange to his Instagram story, where he captioned it: “Keep the same energy you had about me publicly, privately”.

Kourtney's return from the trip saw a very sweet family reunion as her children greeted her with rose petals and a welcome home sign they had made.

Penelope, nine, and six year old Reign were seen running into Kourtney's arms after scattering the flowers across the pavement.

The pair were seen in a video shared to Kourtney's account where they set down the bowls they were using to scatter roses and rushed to their mother for a hug.

For the latest news on your favourite Kardashians, sign up to OK!'s daily newsletter.