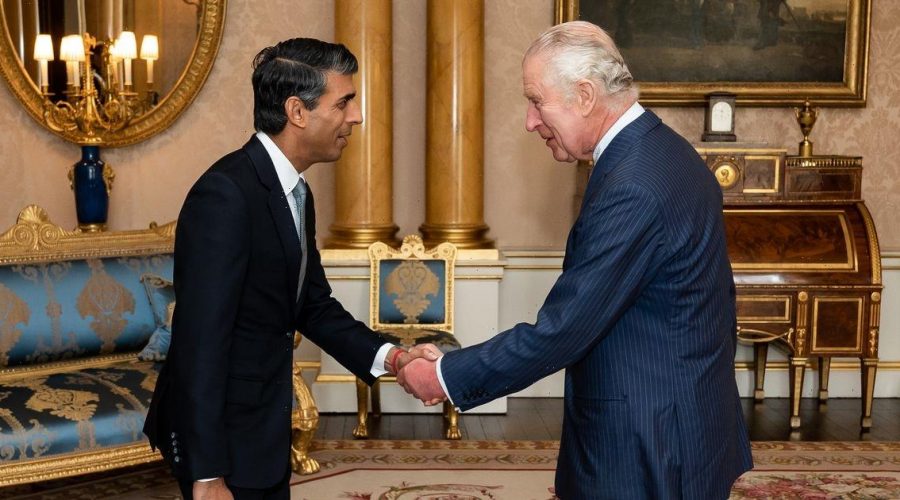 King Charles has echoed his late mother Her Majesty the Queen’s final royal engagement by appointing the new Prime Minister.

As head of state, it is Charles’s duty to appoint the head of His Majesty’s Government.

The Royal Encyclopaedia states that the appointment of a prime minister is “one of the few remaining personal prerogatives of the sovereign”.

Charles seemed in good spirits as he arrived at Buckingham Palace for the royal engagement and waved at the cameras as he passed by.

Photos from inside his audience with Rishi show the 73 year old smiling warmly at the country’s new leader and shaking his hand.

The meeting saw Charles invite Rishi to form a government after Liz departed as the shortest-serving prime minister in history.

Rishi is the country's youngest PM in 200 years at the age of 42 as well as the first ever British-Asian person to become PM and the UK’s first Hindu leader.

Charles’s meeting with Rishi echoes his late mother’s Balmoral engagement with his predecessor, whom she met with just days before her death last month.

The 96 year old monarch beamed in snaps taken at Balmoral Castle on 6 September after Liz travelled there from London to meet with Her Majesty.

The greeting of a new PM traditionally takes place at Buckingham Palace, but due to the Queen's ailing health, it was decided that the two would meet in Scotland where Elizabeth II was spending her summer break.

Liz was formally invited to form a Government and become prime minister during her audience with the Queen.

Wearing a plaid skirt and cardigan, Queen Elizabeth – who was aided by her walking stick – smiled as she shook the then-new PM’s hand. Just two days later, the beloved Queen died.

King Charles III: Our New MonarchAvailable in shops and online here for £5.99

The snaps were the last official pictures of Elizabeth II.

Six weeks after her meeting with the Queen, Liz gave her farewell speech on Tuesday 25 October as she stepped down from the role.

“From my time as Prime Minister I’m more convinced than ever that we need to be bold and confront the challenges we face,” she began.

“We simply cannot afford to be a low-growth country where the Government takes up an increasing share of our national wealth and where there are huge divides between different parts of our country. We need to take advantage of our Brexit freedoms to do things differently.”