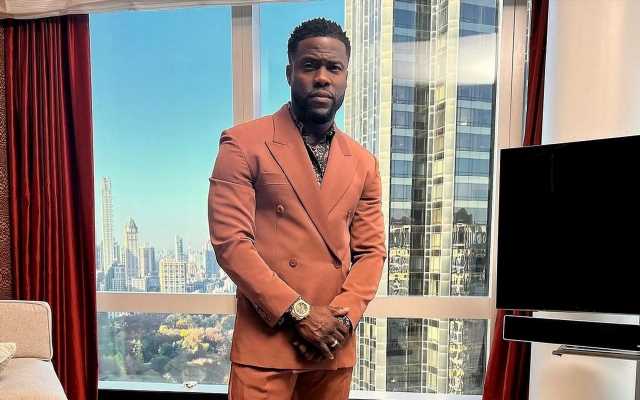 The ‘Get Hard’ actor has had a discussion with wife Eniko Hart about not adding another baby to their brood after he welcomed his fourth child last year.

AceShowbiz –Kevin Hart has ruled out having more kids after becoming a father for a fourth time.

The comedian has son Kenzo, three, and 13-month-old daughter Kaori with his wife Eniko Hart, and daughter Heaven, 16, and son Hendrix, 14, with his ex-wife Torrei, but he will not be adding to his brood after a discussion with Eniko.

When asked during recording for Saturday’s (20Nov21) instalment of Britain’s “The Jonathan Ross Show” if he plans to have any more children, he replies, “No, Jonathan. I’m doing a little thing called throwing my balls in the trash.”

“I don’t want any more kids, I’m done. Me and my wife discussed it. I think it’s safe to say that we will not be having any more kids. That’s a promise.”

Kevin also joked he “doesn’t like going home” because his house is so noisy.

“Another baby, man,” he laughed. “I’ve got a loud household. I’ve got four kids, two dogs. I don’t like going home!”

Kevin admitted he doesn’t remember Usher singing at his birthday party in July 2019 because he had left early, and he woke up with a “half-chewed” sandwich on his neck before finishing it off.

“It was a big birthday. I had Usher sing at my birthday,” he added. “He wasn’t supposed to. I don’t even remember it. It happened after I left, I left my party early.”

“I think I left an hour and a half after it started because I couldn’t stand. I wasted a lot of money. I passed out on the couch in a tuxedo. There is nothing worse than falling asleep in places where you’re not supposed to be. My wife has no patience for my drunk behaviour so she leaves me wherever I am.”

“I think I had something to eat as I was coming in but I woke up with a half-chewed sandwich on my neck. I woke up and thought ‘I might as well finish it.’ “