There’s nothing like a Sunday dinner with the family, and for the first time since September, Kelly Ripa, Mark Consuelos, and their three adult-looking kids got a chance to share a meal together.

“Sunday dinners with #daddy,” Kelly Ripa, 50, captioned the photo she family photo she posted to Instagram on Dec. 6. In the heartwarming shot, Mark Consuelos, 49, is seated at the table, surrounded by his and Kelly’s children – Lola Consuelos, 19, Michael Consuelos, 23, Joaquin Consuelos, 17 – and Kelly’s 21-year-old nephew, Sergio-Giuseppe Ripa. The Live host had a reason to celebrate since this was the first time Mark was able to dine with the family since September.

Mark has spent the last four months in Canada, finishing up Riverdale’s fourth season and the start of season 5. Production on the hit series shut down in March due to the coronavirus outbreak, and due to COVID-19 protocols, the show’s entire cast and crew had to remain on set in Vancouver until everything was wrapped up. In late September, Mark gave an update on how he was handling the separation in late September. “1 month down…3 to go,” he captioned an Instagram post that featured two photos of him cuddled up close to his wife. “Missing my home team.”

A lot happened while Mark was off in Canada. Lola voted for the first time, casting her pick in the 2020 presidential election. “Couple of chips off the ol’ block,” Kelly captioned a photo of her and Lola, each rocking an “I Voted” sticker. He also missed out on celebrating National Sons Day with his two boys, but Kelly posted a few pics of their adult sons, looking all grown up.

Unfortunately, Mark was also away when Kelly turned 50 on Oct. 2. “Happy Birthday to my little ray of sunshine,” he captioned a trio of pictures of her lounging on a serene lawn against a sun-kissed sky. “I love you, sexy.” Kelly responded in the comments, “Thank you, baby. Wish we were together.” The following month, Kelly shared a “throwback” picture of when she and Mark were on vacation. “Take us away, baby,” she captioned the shot of a shirtless Mark. “Let’s go there now!” he replied, to which she added, “Come get me #daddy.” Well, now that they’re back together, Mark and Kelly can make up for lost time. 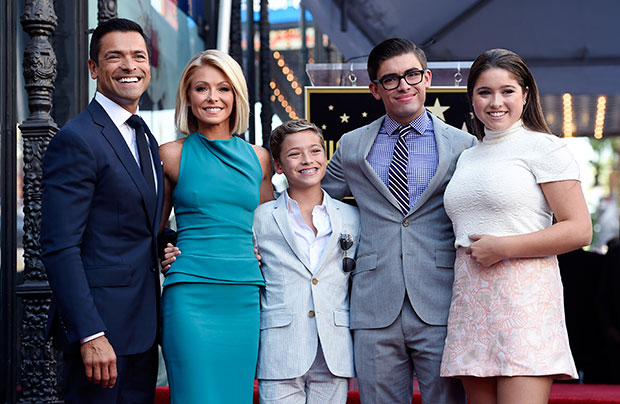 “The one thing I learned about social media from my daughter is I should not clap back, but I feel like the clapback is what people want,” Kelly said in an August 2020 interview with PEOPLE. She and Lola sat down to talk about their social media habits. “But I thought you were going to say I shouldn’t post thirst trap pictures of your dad,” the Live host said to her teenage daughter. “That’s disgusting.  I had to block that out of my mind. I forgot that you even did that. I don’t even know if I follow you on Instagram still.”