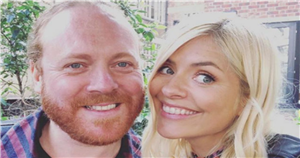 Celebrity Juice host Keith Lemon has revealed that Holly Willoughby is the “tightest” celebrity he knows and says that the TV favourite "likes to have a moan."

Keith, 47, was asked the question: “Which of all the show’s team captains past and present was the stingiest?”

The choice was between Celebrity Juice’s four past and present captains, Holly Willoughby, Laura Whitmore, Emily Atack
and Fearne Cotton and, according to Keith, Holly is the “stingiest”.

Keith was speaking on Chris Kamara's new show – The Chris KaMOREa Podcast with Plusnet and during the chat also exposed Holly as being the most likely to complain.

After a few sniggers from Keith when asked who was the tightest, Chris, known to many as Kammy, had to explain he was referring to money, and then Keith responded.

He said: “Well, Laura Whitmore is very generous. For Christmas, I was after, you know, Baby Yoda from Mandalorian – and she got me one.

"It got sent to her I think, because she sent me pictures saying 'look what I just got.'

Keith continued: "Fearne was very kind, she'd often get me something from Vivienne Westwood.

"Our relationship was always based on fashion, me and Fearne, all we'd talk about is clothes.

"I'd often buy something that she wanted, or vice versa – even just like a lovely pair of socks from Vivienne Westwood.

"Who is the tightest? Emily has just started making her money so I guess she didn't have any money in the past… Is Holly the tightest? I don't know, she's got lovely eyes."

Kammy then, sticking to finding out more about the four captains, asked who likes to complain the most and Keith was quick to reply: "Holly".

Despite Keith’s admissions the pair are known to be very good pals.

Holly quit her role as team captain on Celebrity Juice last year after 12 years, reportedly in order to spend more time with her family.

Holly announced her decision to quit the show on Instagram, in a lengthy post which reads: "Thank you @celebjuiceofficial for 12 years of fantastic chaos… I can’t quite believe what we’ve done and how quick that time has gone.

"Thank you to you all for watching..we’ve always had the loudest and best audiences. Also a huge thank you to @itv2 for believing in the show in the first place and for all of your support…”

To read more about Holly Willoughby sign up for OK!'s daily newsletter here.