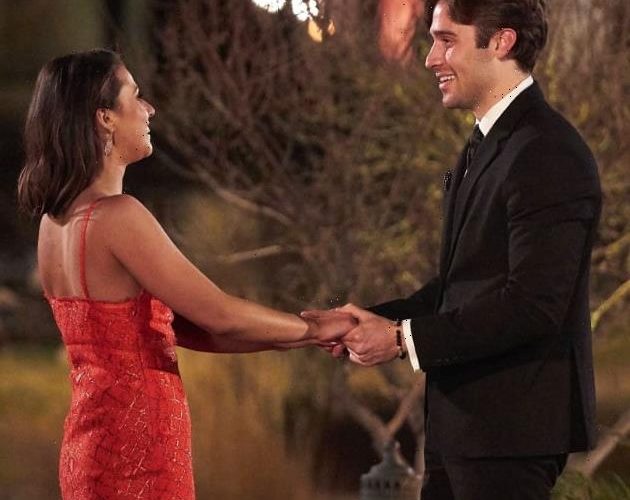 Now it must be asked, however:

Can she also take it?

The opinionated reality star found herself in a bit of hot water this week after she seemingly hurled some shade in the direction of suitor Greg Grippo.

This hopeful husband earned Katie’s First Impression Rose back on the latest season premiere, earning immediate front-runner status in the eyes of most viewers.

However, The Sun then allegedly tattled on Grippo, quoting a source who alleges that Greg is hiding his aspirations to be an actor and is only on the show to bolster his resume.

“He is absolutely lying about his career and intentions on the show,” says this insider. “He’s always wanted to pursue an on-camera career.”

At last check, Grippo was still vying for Thurston’s heart on The Bachelorette — but episodes were filmed months ago.

Based on something Katie just did on Instagram, it sounds very much like she sent Greg home at some point on her season, and that perhaps things didn’t end on a positive note.

when the guy next to you is getting interrogated about wanting to be the bachelor and you’ve gotta pretend to be disgusted while hiding your acting career aspirations.

And here’s the kicker:

Because she never meant to in the first place? Or because she realized how poorly the move may have made her look?

According to a screenshot obtained by Bachelor Nation fan account @Bachelorteaspill, Samantha fired back after Katie after she apparently hurled some shade in her brother’s direction, writing:

“@thekatiethurston likes this post but was such a supporter of removing the toxicity and mean girls when she was on Matt’s season, you’d think if those intentions when [SIC] genuine she’d had just as much of an issue with this post as well.

“Really disappointed in this.”

It’s true that Thurston endeared herself to many Bachelor Nation residents when she called out bullies on Matt James’ season of The Bachelor.

Does that mean she’s being a hypocrite in this case?

If she really tease mock Grippo via the meme posted above?

Grippo’s siblings sure thinks so.

Earlier this month, Thurston only had kind things to say about Grippo.

“What I loved about Greg is he was just true to himself, which was this very nervous, very uncomfortable guy,” she said.

“He didn’t try and act cool or, like, be this guy that he’s not. He was just like, ‘This is me and I’m really freaking scared.’ And I thought it was really endearing, you know?”

This view, of course, is seen as ironic now by some, considering Grippo attended William Esper Acting School and may be on the show for — you guessed it! — the dreaded wrong reasons.

Thurston, who recently screamed at anyone not appearing on the show with legitimate intentions, appears to think differently of Grippo these days than she did upon first meeting him.

Which happens in real life, too, of course.

Does Grippo make it all the way with Thurston, though?

Does he end up as her winner and this social media flap also serves as a real that they’ve since broken up?

Not according to The Bachelor spoilers that we recently read and then posted.

A different brown-haired hunk ends up stealing Thurston’s heart instead.