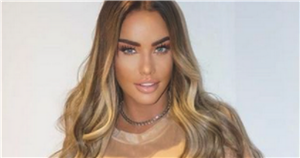 Katie Price has given fans a close up look at the results of a facelift she previously said she had feared she would die from.

The model, 43, posted an Instagram video with "no filter" after having a facial on her newly taut face while she recovers in Turkey.

In the aftermath of her recent surgeries, the mum of five, said she had been "terrified" about what might happen during the procedures, telling The Sun: "I just thought, ‘This is it, I’m going to die. I was terrified of looking like a freak, like that Bride of Wildenstein or a fake doll."

But now Katie is recovering well and was happy to bare her fresh face for all on Instagram, telling followers of her amazing pamper session.

"I've had a nice facial today, my first facial since I've had my face done," she told fans.

"And there's no filter, obviously I'm still healing, that was such an amazing facial."

She added: "My surgery is looking good. I'm sooo happy."

The photos showed that Katie's face might still be a little swollen in places and the star said on her video she's "not fully recovered yet".

While the final results might be a little way off, blonde Katie was looking very happy with her new appearance.

Katie has put herself through a whole host of operations recently, enduring five cosmetic procedures including a lip lift, liposuction, and Brazilian bum lift.

She told The Sun they left her in "horrendous pain" and looking like "a monster".

But all that was behind her this week as she looked to be recovering well and managing the strains of the surgery – she's even branded herself a 'surgery veteran' after undergoing her third facial op.