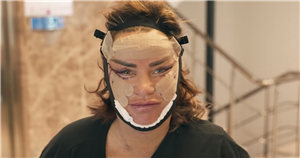 Katie Price has shared a new video of her face and lip lift surgeries on her YouTube channel, showing viewers the recovery stage of the procedures.

The 43 year old, who could be facing prison time if she misses her bankruptcy hearing, travelled to Turkey earlier this year to go under the knife and filmed the entire journey to show her legion of fans what she went through.

While there, she endured hours of surgery which included a full body liposuction, eye and lip lifts, having fat injected into her bum and liposuction under her chin.

Last week, she shared the first part of the her time on the operating table and the mum-of-five has now returned to post the second gruesome clip.

Following the surgery, Katie was seen being wheeled into a room, where she explained she "felt sick" before moaning about how cold she was while nurses helped move her onto a hospital bed.

"I don't even know what I expected but she looks like she's in so much pain. But I'm going to stay here anyway 'cause I got a bed, because I'm supposed to be in one. I'll just be there for her all night and try look after her as best I can," her fiancé Carl Woods, 32, then told the camera.

Katie then gave an update on how she was doing two hours after the surgery as she said: "Quick update guys, because Carl's just told me my eyes are seeping but obviously I can't see. It's easier to keep them shut…"

"Pain wise, believe it or not I just feel the pain coming from my bum area, the cheeks, the hips. It's sort of going thud, thud. It's all good, I probably don't look it. I'm one million per cent happy I did it. I wouldn't do it – no one should do surgery unless it's a million per cent really what they want."

She was later seen up and walking as she came face to face with her future husband Carl. "Hello Carl. I love you," she said, as he replied: "I love you too," before giving her a kiss.

"You're so worried about me, aren't you? she then questioned as he said: "Yes," while keeping his arms folded.

Later, Katie told viewers that she was annoyed about creases that she could still see on her forehead and asked the doctor if she could have it lifted. He told her she "doesn't have enough skin" to do that.

"Now I know we're going home tomorrow, so all night I've been thinking, 'Are you going to be happy still when you get home?' Because I know what I'm like," she continued. "As you get older, your lips get smaller and I don't want to have to keep injecting them every month, it hurts."

With that in mind, she asked the doctor to lift her lip a touch so she doesn't have to go through the pain of getting the injections.

Katie was then seen sitting in a car going back to the villa as she explained it was "the quickest procedure" she ever had done and said it didn't hurt but she could feel it swelling up.

"I have no regrets, very happy. No more moaning. It's just this bit now that people don't normally get to see, the in between stages where everyone's like, 'It don't look like her. Is it going to settle?' I guarantee you, yes it will settle. I've seen this many times on my face," she said.

Earlier in the video, Carl could be seen sitting on a hospital bed as he explained why he decided not to do surgery himself. He said: "Basically, I've contemplated this all morning. I'm not in this surgery world. So, I'm not used to it…"

Carl explained that he used to be in good shape pre-pandemic when he went to the gym often, but hasn't been working out as of late.

Speaking about getting surgery to change your appearance, he said: "Kate loves it and that's great, but for me, that ain't the man that I am. I'm not into cosmetic surgery and stuff like that so I'm going to go back home work out, diet and do it the hard way."

For all your updates on Katie Price, sign up to our daily OK! newsletter.