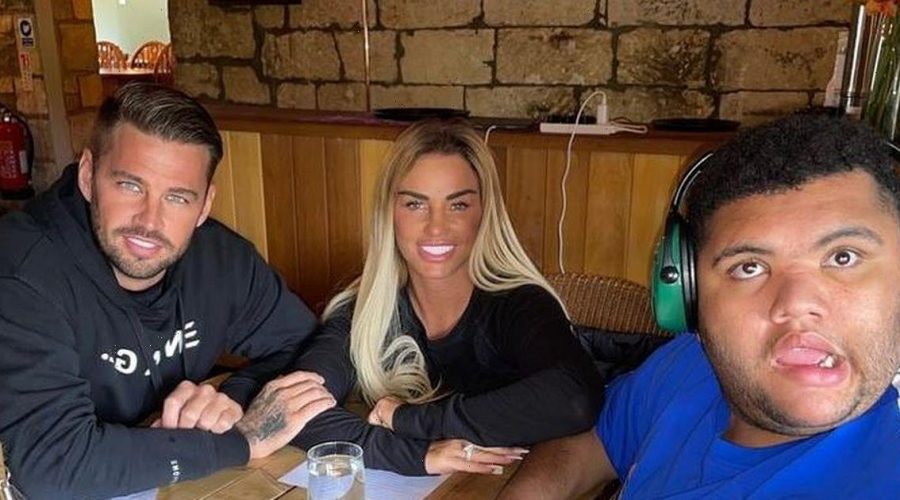 Katie Price has posted a family snap alongside her son Harvey and fiancé Carl Woods after speaking out on her drink-drive crash.

In the photo, Katie, 43, is smiling while sitting at a table with Harvey, 19, and Carl, 32, days after she released a statement saying she took "full responsibility" for the crash she was involved in on 28 September.

She didn't post any details on exactly where or when the photo was taken, but simply captioned it with several blue heart emojis.

The star was involved in the crash last month near her home in Sussex and was charged with driving while unfit to drive through drink, using a motor vehicle on a public place without third party insurance, and driving while disqualified.

As of last week, Katie was receiving treatment in private hospital The Priory but released a statement to the Sunday Mirror via her worried family.

The statement describes how Katie is still receiving treatment but: "Acknowledges and takes full responsibility for her recent actions; she knows they were wrong and apologises."

The statement added: "Kate is continuing to receive treatment and is making positive progress.”

The court was told she was heard saying at the scene: “I took drugs, I should not be driving. I admit it all.” She will be sentenced on 15 December.

While there was outrage from some fans at Katie's actions, her family have remained fully supportive. They told the Sunday Mirror: “As a family we want to thank you all for the support and well wishes that Katie has received.

The statement comes as Katie releases her new memoir about life with her eldest son which is titled Harvey And Me.

In an extract from the book, Katie admitted fears her son Harvey would be left alone if "sometime dramatic happened in my life".

Written a few months before Katie's drink driving crash, the star wrote about Harvey moving away to residential school: "I don’t like the thought of being apart from him.

"I’ve always felt secure knowing that no one can take Harvey away from me, and I know it sounds stupid, but this feels like he’s being taken away from me."

She added: "I’m slowly starting to get over the distance now. I’ve been reminding myself that he’s absolutely fine."

Her family added of the new book: “Kate's love for Harvey is something that can never be questioned, and in their new book, Harvey & Me, we hope you can gain a sense of their relationship, bond and further understand a day in the life with Harvey – we thank you for your continued support."