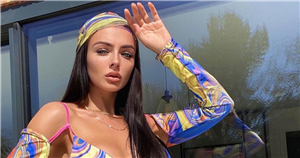 Kady McDermott has been forced to hit back at trolls who have claimed she’s had work done to her face.

The former Love Island star, 25, took to her Instagram Stories to criticise the comments about her face after someone said: “She’s had so much work done to her face since Love Island”.

Hitting back, Kady pointed out that she has grown up since starring on the ITV2 show in 2016.

She explained: "People make me die though with their comments honestly ‘she’s had so much work done to her face since love island’ I WAS ON LOVE ISLAND 5 YEARS AGO I just turned 20 so I was a legit child!!!! I’m 25 now of course my face is going to change!"

The reality star said she had tried to ignore the comments at first.

She wrote: "I don’t normally post stuff like this and I never normally read comments about myself but I’m having a crappy day and decided to read them to make myself feel worse lol."

Kady added that she always been “open” about any cosmetic work she has had done.

She continued: “Only thing I’ve ever had done to my face was a bit of lip filler on my top lip which I’ve always been open about and I love it. And then the obvious one breast implants…

“But honestly people do my head in sometimes. Rant over.”

Kady’s comments were alongside an article about herself in a green bikini.

Kady had posted the mirror selfie on her Instagram page the day before with the caption: “What is coming is better than what has gone”.

Her followers were quick to shower Kady with praise about the snap, with TOWIE star Kelsey Mae Stratford commenting with a series of fire emojis.

Meanwhile one fan wrote: “Wow how unreal,” while another added: “Beautiful”.

It’s not the first time Kady has had to respond to trolls online.

Earlier this year the star, who is dating former TOWIE star Myles Barnett, was forced to deny she was pregnant after she posted pictures from a trip to the Maldives.

One of her followers wrote: “Congratulations on your pregnancy” alongside a grimacing face emoji, to which she responded: “only thing in my belly right now is a pina colada and pad Thai”.

Kady and Myles, 27, have been dating on and off for the last few years. The couple purchased a bungalow in Hertfordshire in 2019, which they have now transformed into a stunning six-bed house.