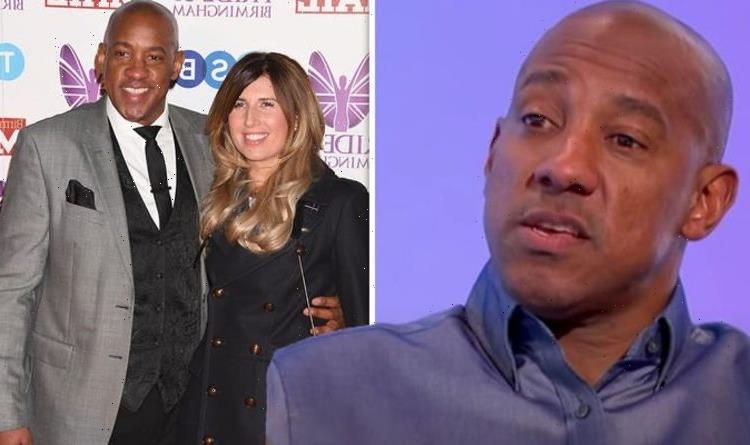 Dion Dublin says he 'doesn't want to talk about MasterChef'

Homes Under The Hammer star and former professional footballer Dion Dublin, 52, has spoken out on his busy schedule, as the star hinted he may need to cut down on his work commitments. Speaking in an exclusive interview with Express.co.uk, Dion admitted “juggling” his various roles on TV and radio “is becoming difficult”.

The Football Focus presenter said: “When it comes to busy, it’s ridiculous at the moment.

“There’s so much on, with TV and radio and loads of footie and stuff.

“Juggling is becoming difficult, but we’ll crack on.”

When quizzed on whether he would consider slowing down with his work, the property expert quipped that he’d have to ask his wife Louise for her opinion.

He laughed: “Hold on a minute, I’ll just get the wife – wife can you answer this question please?”

The star then continued: “I’m enjoying it, I love my TV and the radio, I love working with the Beeb, I like working down south for Premier League TV, it’s all good at the moment.

“I feel strong and positive and young enough to just keep cracking on.

However, Dion went on to admit that he does need to begin to cut down on “travelling so much” for his work.

The sports pundit said: “What I have got to try and slow down with is travelling so much I think.

“That can tire you out.

“But I’ve got a fortunate job, I’m not going to take it for granted.

“I’m very fortunate to have this job and talking about something I love, whether it’s property or sport, I’m not going to cut it short if I don’t have to.”

Alongside his roles on Homes Under The Hammer, Football Focus, and BBC Radio 5 Live, Dion is also preparing to launch his own auction house.

The auction house, Lot 9, is set to hold its first auction on October 28 at Hotel Football in Manchester.

Dion has been passionate about property since he first got involved in the business in 1992.

He revealed: “I’m opening my own auction house, so my first auction is at the end of October.

“I’ve been buying property since 1992, so I’ve always been into my property, buying and selling and renting out.

“So with my business partners, I’ve decided to start an auction house called Lot 9, which is obviously my number and Lot 9 might be lucky for people.”

The presenter added: “I was doing property long before Homes Under The Hammer.

“I’ve been doing Homes Under The Hammer now for seven years and 20 years before that, I was doing property.”