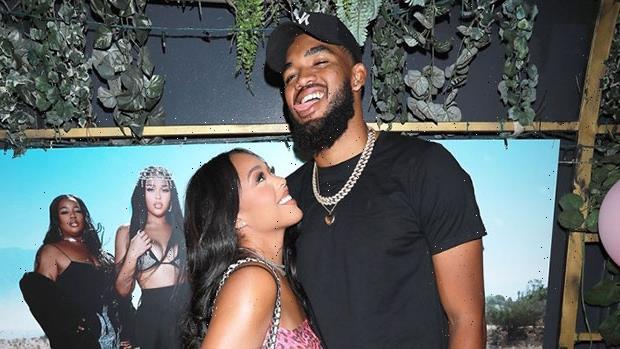 Jordyn Woods has stunned in a skintight, sheer dress with mesh cutouts, as she stepped out for a date night with Karl-Anthony Towns.

Jordyn Woods, 23, left little to the imagination when she rocked a stunning pink dress on a date night with her boyfriend Karl-Anthony Towns. The brunette beauty opted for a skintight, asymmetrical dress with mesh cutouts on her thighs and arms, along with a plunging neckline. She gave fans a peek at the hot pink look in a selfie on her IG story with Karl-Anthony, which showed him rocking a blue basketball jersey.

The NBA star also wore black pants, along with a gold chain necklace and a matching watch. Meanwhile, Jordyn gave fans a closer look at her ensemble in a series of photos. She paired the bright dress with strappy, silver heels, a matching silver diamond necklace, and a green Chanel handbag. She captioned the photo set with the Cardi B lyric: “I do what they say I can’t.”

One friend commented, “& you do it TOO DAMN WELL!” while her beau wrote, “Everyone else playing for 2nd place.” The athlete recently hinted at proposing to Jordyn, who he’s been dating for over a year. After she clapped back at a troll on Twitter about how their relationship is “solid,” Karl went as far as to say he plans to put a “ring” on Jordyn’s finger, hinting at an upcoming marriage proposal.

“So I got the baddest girl in the game and you think I’m gonna waste my energy with anyone else gtfoh! Same haters we got now are gonna be the same ones we have when I put that ring on her finger,” he wrote. The pair made their relationship official over her Sept. 23 birthday celebrations in Mexico, and she opened up to HollywoodLife.com in an EXCLUSIVE interview about their union.

“I think we are two young ambitious people and we found comfort in each other,” she said, explaining that she was very much in love, but wasn’t looking to start a young family, as her former BFF Kylie Jenner, 23, did by having a baby at age 20. “Of course, one day in the future I would like to have a time to settle down and have a family of my own. But right now I don’t want things to go way too fast … You know, things are awesome. I am excited. I am excited for the day when it comes, but I am not pushing for it any time soon.”