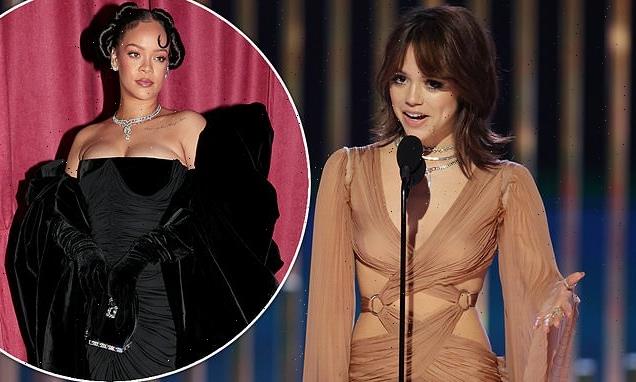 Jenna Ortega was praised by fans for saying Rihanna’s name right at The Golden Globes as she announced the nominees for Best Song in a Motion Picture on Tuesday.

The actress, 20, took to the stage to confirm that Rihanna, 34, was nominated for the award for her song Lift Me Up, which was featured in Black Panther: Wakanda Forever.

And she was lauded by fans for being able to pronounce the popular’s singer name correctly, saying ‘Ri-An-ah’. 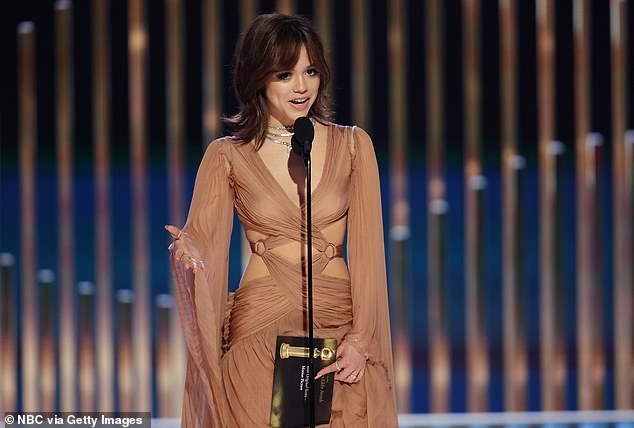 Speech: Jenna Ortega (pictured on stage) was praised for saying Rihanna’s name right at The Golden Globes as she announced the nominees for the Best Song in a Motion Picture award on Tuesday

Sometimes, Rihanna’s name is said as ‘Ri-Awhn-Ah’, which is incorrect, with the star confirming in a 2012 interview that Jenna’s utterance of the moniker is right.

In Jenna’s speech, she attracted applause as she said she was excited to announce the winner, with Naatu Naatu from RRR, Carolina from Where The Crawdads Sing, Ciao Papa from Pinocchio and Hold My Hand from Top Gun: Maverick also up for the gong.

Rihanna lost out on the gong as Naatu Naatu by Kala Bhairava, M. M. Keeravani, and Rahul Sipligunj was the winner of the award.

However, fans took to TikTok after the ceremony to share their delight that the Wednesday star pronounced Rihanna’s name right. 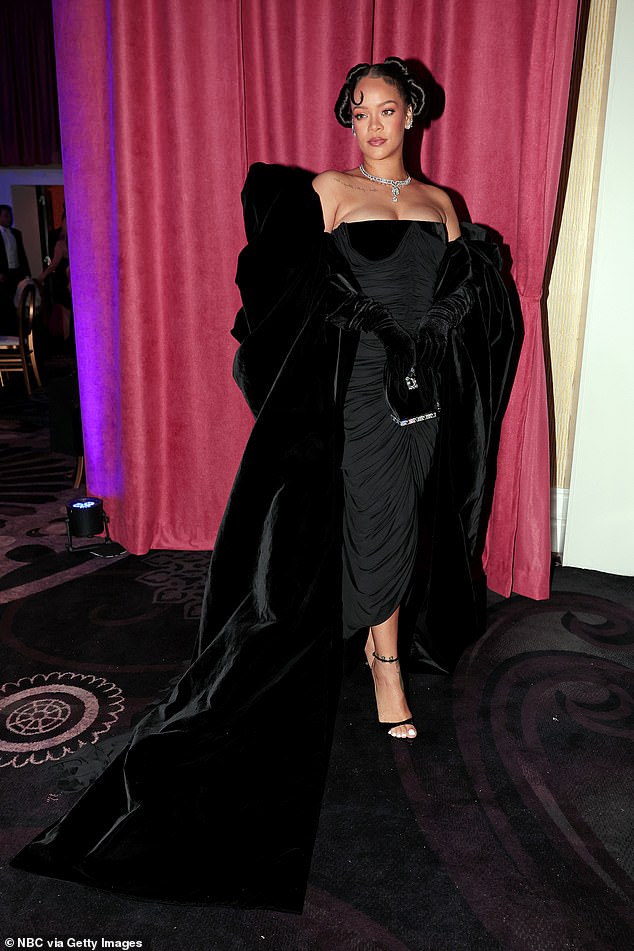 Right: Jenna was lauded by fans as she pronounced the singer’s name as ‘Ri-An-ah’, which is correct. (pictured: Rihanna at the Golden Globes on Tuesday)

It comes after Rihanna was seen giggling beside her beau A$AP Rocky at the Golden Globes on Tuesday as she received random acknowledgements from host Jerrod Carmichael and presenters.

Despite losing out for the Best Song in a Motion Picture, the Umbrella hitmaker looked ecstatic to be in a room with fellow A-listers as it marked a rare night out for herself and A$AP Rocky since welcoming their son in May. 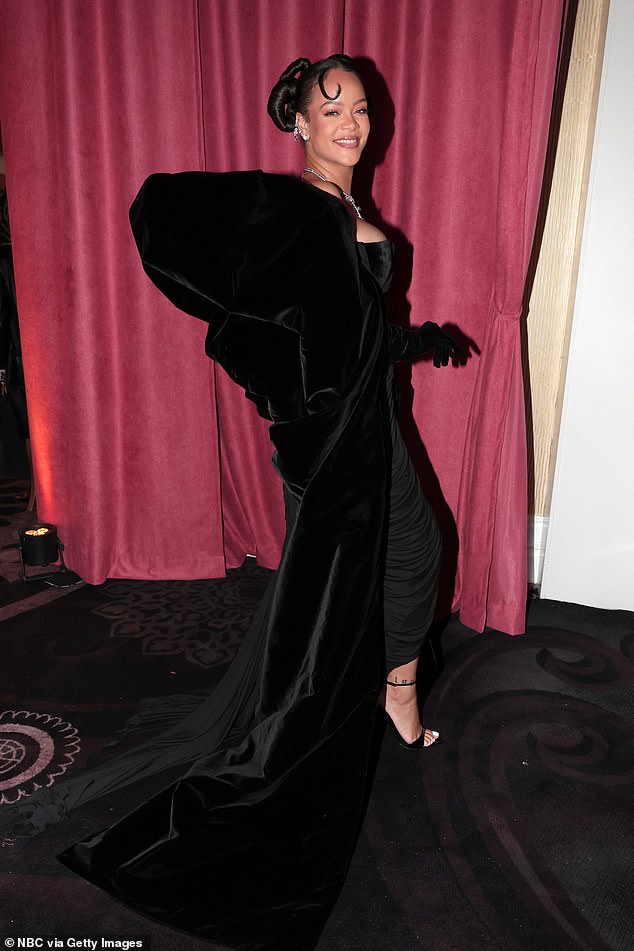 Glam:  Sometimes, Rihanna’s name is said as ‘Ri-Awhn-Ah’, which is incorrect, with the star confirming in a 2012 interview that Jenna’s utterance of the moniker is right (pictured Tuesday)

Actress Niecy Nash, who was one of the evening’s presenters, kicked off the Rihanna-centred dialogue when admitting on stage that she had dressed as the Diamonds singer this past Halloween.

‘Rihanna, I love you, and I dressed up as you for Halloween. I just had to say that. All right. Had to take my moment,’ said the Dahmer star, before announcing the winner for best actress in a TV series, musical or comedy.

Later in the night, Billy Porter made a callback to Niecy’s admission by stating that if he ‘believed in Halloween, I’d have dressed up like Rihanna, too.’

But it was host Jerrod Carmichael who made the most ‘controversial’ remark when he shared his opinion regarding Rihanna’s long-awaited ninth studio album.

Fans have long harassed the singer on social media to ‘hurry up’ since she hasn’t released an album in its entirety since 2016’s Anti.

‘You know what? Honestly only because I see Rihanna is here, and I’m going to say something very controversial,’ said Jerrod, adding: ‘I will actually get in trouble for this.’

He then exclaimed: ‘Rihanna, you take all the time you want on that album, girl! Don’t let these fools on the internet pressure you into nothing!’

The camera then flashed to Rihanna who could be seen cackling in her seat.

Lift Me Up from the Black Panther: Wakanda Forever soundtrack broke Rihanna’s three-year music single when it premiered in October. 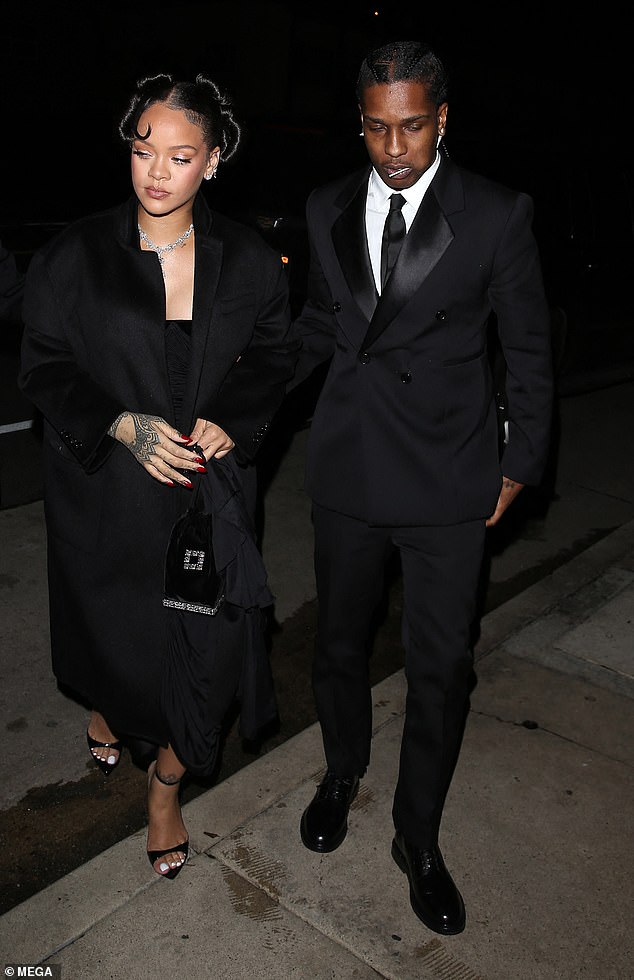 Love: Rihanna was captured giggling beside A$AP Rocky in the audience as she received random acknowledgements from host Jerrod Carmichael (pictured together on Tuesday)

Avatar: The Way of Water 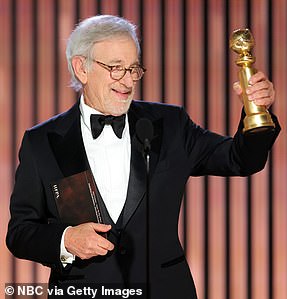 Against all odds: Steven Spielberg’s The Fabelmans earned top honor Best Picture – Drama despite being a box office flop

The Banshees of Inisherin – WINNER

Everything Everywhere All At Once

Glass Onion: A Knives Out Mystery 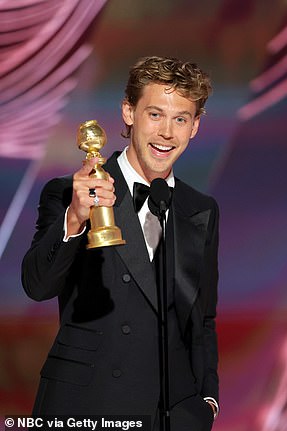 Michelle Yeoh – Everything Everywhere All At Once – WINNER

Brendan Gleeson – The Banshees of Inisherin

Barry Keoghan – The Banshees of Inisherin

Ke Huy Quan – Everything Everywhere All At Once – WINNER

Kerry Condon – The Banshees of Inisherin

Jamie Lee Curtis – Everything Everywhere All At Once 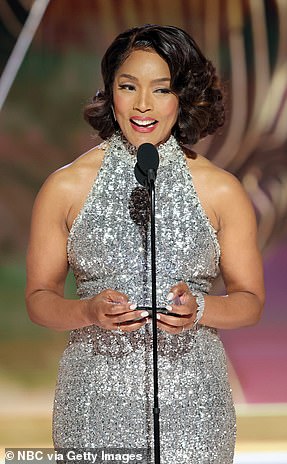 Daniel Scheinert, Daniel Kwan – Everything Everywhere All at Once

Martin McDonagh – The Banshees of Inisherin

Daniel Scheinert, Daniel Kwan – Everything Everywhere All at Once

Marcel the Shell with Shoes On

Puss in Boots: The Last Wish

All Quiet on the Western Front (Germany)

Carter Burwell – The Banshees of Inisherin

Where the Crawdads Sing – Carolina

House of the Dragon  – WINNER 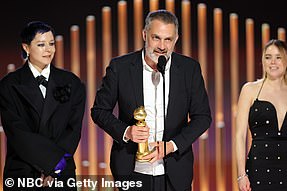 Only Murders in the Building

Andrew Garfield – Under the Banner of Heaven 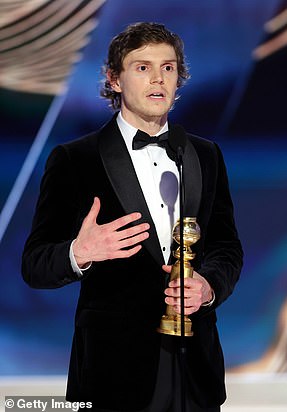 Emma D’Arcy – House of the Dragon

Selena Gomez – Only Murders in the Building 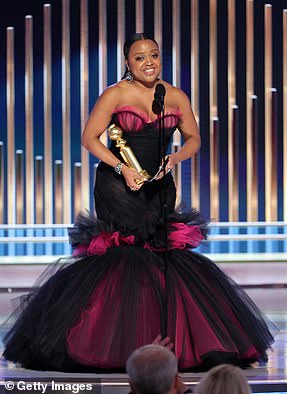 Steve Martin – Only Murders in the Building

Martin Short – Only Murders in the Building

Claire Danes – Fleishman Is in Trouble

Daisy Edgar-Jones – Under the Banner of Heaven 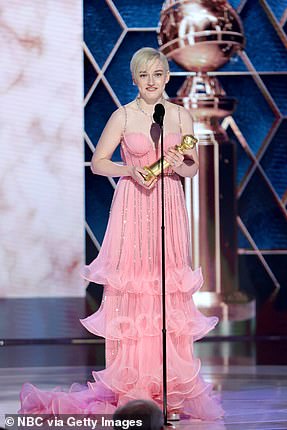