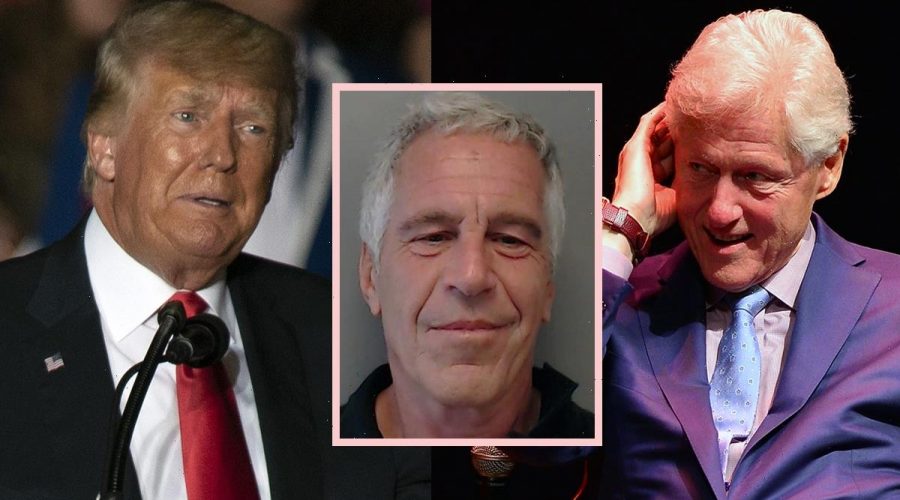 Maybe the biggest, most shocking political scandal of the past few years very nearly went from suspicion and speculation to something more concrete… until it was stopped cold.

We are speaking of course of Jeffrey Epstein.

The infamous convicted pedo was arrested in 2019, and many expected him to give up the goods on the powerful men his illicit business catered to. Unfortunately those hopes were dashed when he was found in his jail cell, apparently having died by suicide.

The popular theory was naturally that he did not kill himself but rather was silenced to stop him from spilling on his famous friends, who included Donald Trump, Bill Clinton, and Prince Andrew. Now we’re getting more posthumous dirt that both supports that theory… and kind of bolsters the official story.

After being accused of sex trafficking in the mid-2000s, the billionaire evaded any serious consequences with a so-called “sweetheart deal.” Not only did pleading guilty to the lesser crime of soliciting a minor for prostitution get him off the hook despite the mountain of evidence, the inexplicable bargain also guaranteed immunity to “any potential co-conspirators.”

This, however, was what got Trump’s Secretary of Labor Alexander Acosta in trouble, because years earlier he had been the US attorney who signed off on it, even apparently going against the law to keep it from the alleged victims. (You can learn more about it HERE.)

That was all public information by the time he was arrested again by the Southern District of New York, so there was no way history was going to repeat itself. This time if he wanted leniency he was going to have to give up others. You know, that flipping thing that Trump thinks “ought to be illegal.”

We’ve seen enough evidence to guess that Epstein had the dirt on at least a few of these bigwigs. And in his upcoming book, Too Famous: The Rich, the Powerful, the Wishful, the Damned, the Notorious – Twenty Years of Columns, Essays and Reporting, Michael Wolff claims he was ready to spill it!

Wolff infamously got way too much access to the White House to write his controversial Fire And Fury, and this seems to be no different. Having spent time with Epstein at his NYC mansion and Paris apartment, as well as those around him, the gossip journalist is now spilling everything he saw and was told by confidants.

Per excerpts obtained early by Dailymail.com, one major scenario he claims to have inside deets on is the arrest. According to the book, Epstein was flying home from Morocco to NYC with his girlfriend, who Wolff describes as “a young woman from Belarus whom he had put through dental school.”

It was only half an hour into the flight when his pilots were asked to confirm he was on board — that “suddenly alarmed” him, and he demanded they turn the plane around. But he was told it was too late. Just as he feared, when they landed at Teterboro airport in New Jersey, federal agents were waiting to take him into custody.

According to Wolff, Epstein was quick to blame his arrest on other factors than taking down a child sex trafficker. He believed the reason for the new charges was one of “two likely scenarios.”

On the one hand, there was Trump, who was in charge of Justice Department as a whole, perhaps in a way no other president had been. So maybe…

“The White House, through the Justice Department, was looking to press a longtime Republican obsession, and Trump ace-in-the-hole, and get Epstein to flip and reveal the sex secrets of Bill Clinton.”

It certainly sounds reasonable. We know Clinton rode multiple times on the private jet known as the “Lolita Express.”

The problem with the White House theory, of course, is that Trump was close friends with Epstein for many years. There’s even more connections between the two of them than with Clinton. Opening that can of worms would be mutually assured destruction for him, right?? Frankly, we kind of assumed that’s why neither he nor Hillary Clinton brought it up during the 2016 election.

We mean, if your political opponent had been chummy with an alleged underage sex trafficker, how would you ever STOP talking about it?? (Well, we guess you could alternate between that and talking about them taking money from a children’s charity. You know, if that was a thing they had also done.)

Wolff himself concedes there are “many likely holes in these theories” and posits the possibility Epstein wouldn’t — that he was “just one more fallen sexual villain.”

No matter who was seeking dirt, Epstein had it — and was willing to give it up to save his own skin. Wolff writes:

“No matter, in Epstein’s view — shared by Weingarten — that did not mean there wasn’t, even in this climate, a deal to be made.”

Was he really ready to flip?!? That’s huge. Just the fact anyone around him heard him musing on the idea is huge, frankly. It’s that kind of thing that gets potential witnesses, well, let’s not beat around the bush here, murdered before they can talk.

Obviously there are going to be those who believe the Clintons had him killed. Others will assume Trump. As far as we’re concerned, the idea Epstein had any dirt on two presidents is just wholly disgusting. And we hope one day every man in his rolodex answers for any crimes they committed.

One other tidbit from Too Famous, due to hit bookshelves on October 19, may give a different impression altogether of what happened to Epstein.

Wolff claims Epstein made a morbid joke in a note to a friend just hours before his death, writing:

“Pretty crazy. But still just hanging around – no pun intended.”

What would the pun be if he didn’t already know he was about to be found hanged to death? Does this imply he really was planning on committing suicide in his jail cell? That Epstein did kill himself?? Honestly at this point that might be more of a twist in the story.

But we have heard that he was fighting, too.

According to Wolff, Epstein had met with a British PR firm and was about to shell out $3 million in less than two months to try to turn around his public reputation. He also would have, per the book, set up a “war room” with the intention of rebutting the allegations against him, using a “comprehensive dump of information.”

Ugh, frankly we’re glad we never had to sit through that, seeing a bunch of tools on Twitter and YouTube talking about how “trafficking underage girls is good, actually” or whatever.

Wolff also claims in his book that Trump’s longtime adviser and campaign CEO Steve Bannon was helping with the rehabilitation of Epstein’s image in light of the new charges. (Shockingly, Bannon even confirmed as much when the story first came out, though he characterized it differently.)

Now we may have a better understanding of why Bannon would be willing to help someone accused of such monstrous deeds.

Wolff recalls in the book a time when he was visiting Epstein and Bannon called. The author says he heard the Breitbart head tell the infamous pervert:

“You were the only person I was afraid of during the campaign.”

Why? Because of the information he had that could have tanked Trump’s chances of getting elected. (Things like, we don’t know, maybe the truth behind those allegations that he had sexually assaulted a 13-year-old girl at the billionaire’s apartment, a lawsuit which reportedly was dropped because the alleged victim was getting death threats.)

“As well you should have been.”

Could that be why he was still willing to help out? Because he was still scared of what the man knew, maybe even moreso if he was about to go down for underage sex trafficking??

In any case, Wolff does include something fascinating: a supposed conversation between Epstein, his lawyer Reid Weingarten, and Bannon, in which they discussed the possibility of an interview with Gayle King. (Wait, the same strategy as R. Kelly?!)

According to Wolff, Bannon told him doing that kind of interview would be tough, testing him with:

“Here is the first question. What’s the age of the youngest girl?”

To which Epstein replied:

“That would be good, because the answer to that question is that there was one girl who was fourteen years old and she told the police she lied about her age. She told everyone she was 18 because she was afraid she would never be allowed into the house.”

OK, obviously “she lied about her age” is not the greatest defense as is. But Bannon immediately asked if that was the only underage girl, to which Epstein began to answer:

Which obviously didn’t even need to be finished before it was 86ed. But Epstein loved the idea of a TV interview and even later got Bannon to do a mock one with him anyway — something Wolff includes a full transcript of in the book. Wow.

What do YOU think of these latest stories of Jeffrey Epstein and his connections?? Will Too Famous be too irresistible??

10/16/2021 Celebrities Comments Off on Jeffrey Epstein Was Ready To 'Deal' And Give Dirt On Donald Trump OR Bill Clinton: REPORT
Recent Posts