Jeannie Mai is keeping her spirits up post-surgery.

On Thursday, The Real co-host shared a smiling selfie from her hospital room four days after undergoing emergency surgery on her throat. Mai had to abruptly drop out of this season’s Dancing With the Stars competition after her doctors discovered a health concern with her throat which required immediate attention and surgery.

Still, 41-year-old Mai let her fans know she was doing fine with an Instagram Story post. Mai rocked a cute T-shirt featuring a photo of the billboard her fiancé, rapper Jeezy, rented in Los Angeles that read “Vote Jeannie” in order to support her in the competition.

“No chewing no speaking no bad tshirts,” Mai joked. 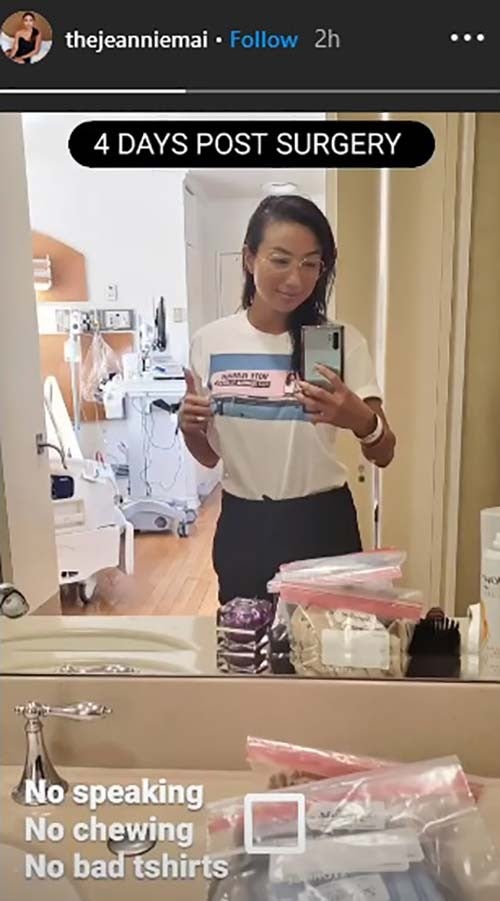 On Monday’s episode of DWTS, Mai addressed her heartbreaking early exit from the competition.

“I am absolutely devastated that my journey on Dancing With the Stars has to end this way,” she said from her hospital bed on Sunday night. “I found out that I have a throat abscess where my tonsils and throat had gotten so infected, it started permeating to the rest of the areas behind my neck and ears. I had to get emergency surgery, which is why I’m here now.”

Mai’s surgery went well, but her doctor noted that if she waited another day, her throat would have closed up. Mai said she was thankful for her experience on DWTS despite its bittersweet ending.

“It was hands down one of the best journeys of my life, so thank you so much,” she said. “I love you, guys.”

11/06/2020 Celebrities Comments Off on Jeannie Mai Shares an Update From the Hospital 4 Days After Surgery
Recent Posts
We and our partners use cookies on this site to improve our service, perform analytics, personalize advertising, measure advertising performance, and remember website preferences.Ok